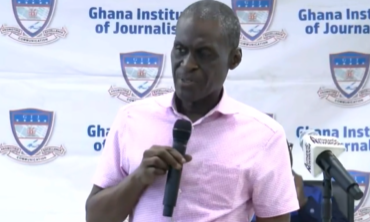 Head of Communication Studies Department at the Ghana Institute of Journalism (GIJ), Dr. Ebo Afful has called on the government to review the law that grants the National Communication Authority (NCA) the power to license media organisations.

Speaking at a forum on freedom of expression and attacks on journalists organised by the GIJ, Thursday, Dr. Afful noted that the NCA being an arm of the Executive would not exhibit fairness in the discharge of this function.

The forum was on the theme, “Re-examining freedom of Expression, Ethics and Threats to the Safety of Journalists.”

Dr. Afful argued that such powers should be given to the National Media Commission.

Taking his turn, the Executive Secretary of the National Media Commission, Mr. George Sarpong said recent events that have sparked claims that freedom of expression is under attack, must be looked at critically.

At least 5 persons including #Fixthecountry convener, Oliver Barker-Vormawor have in the last two months been charged for various comments they have made.

The situation has caused some Ghanaians to believe that freedom of speech is under attack under the Akufo-Addo government.

But according to Mr. Sarpong, these cases are disparate, thus cannot be lumped together in the context of limitation of freedom of expression.

“To be able to say something constitutes a limitation on their freedom, first of all you must be able to show that there is a law on that matter and that the law is reasonably required in the context of these five elements; National Security, Public order, Public morality, Protection of the reputations of others and the rights of other people.

“So anytime you want to make analysis over whether somebody’s encounter with the police constitutes an infringement on that person’s right to free expression, the first thing you want to do is to come to this provision and to check the matter that you are dealing with against these rules,” he stated.

The event was chaired by the Deputy Rector of GIJ, Prof Eric Opoku Mensah with the Head of the Communication Studies Department at GIJ, Dr. Ebo Afful; the Executive Secretary of the National Media Commission, George Sarpong and a Legal Officer from the Commission on Human Rights and Administrative Justice (CHRAJ),  Kwaku Kumi as panel members.