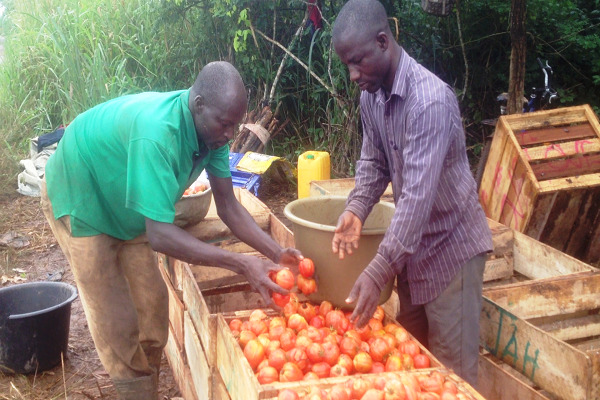 Tomato traders are calling on government to revive the Pwalugu Tomato Factory and establish new tomato factories to address the persistent hike in tomato prices.

According to them, having a factory moderates the supply of tomatoes on the market and in situations where the tomato is going bad, the factory buys and processes it.

Naomi Atuahene, a tomato trader for 25 years described this year as the worst.

According to her, life would be easier if there were factories to process tomatoes before they go bad as well as prevent traders from incurring losses.

This will also prevent value chain players from selling their produce cheaply.

“Our markets are flooded with tomatoes. If we do not devise ways to sell them, we lose profit and vice versa. We suffer losses when we sell them too quickly to avoid it being rotten. We will plead with government to revive tomato processing factories.”

“During former President Kufuor’s era, I worked at the Pwalugu Tomato Factory and I believe it really helped to prevent situations like this,” she intimated.

Prices of tomatoes have shockingly reduced significantly. A box of tomato which was sold in early May 2022 for about ¢3,000 is now selling at ¢300.

About four weeks ago, tomatoes of a small paint bucket was sold at some major markets in Accra for ¢100, but is now going for ¢30.

Joy Business engaged some tomato traders at the Alai Station in Accra and Matilda Baffour explained that, tomatoes are seasonal crops; and we are experiencing a decrease in prices because of the abundance of tomatoes in the middle belt of the country.

“This job is seasonal. There are times like this when we have too many tomatoes and times like April when prices were so high. Tomato is a perishable good and players along the value chain always want to sell their produce without having to incur lot of losses, hence the consumer rush on the markets”, she explained.

Another trader, Olivia Baidoo said although there are lot of tomatoes on the market, patronage is very low.

According to her, traders are competing with farmers as the farmers now prefer to sell at the markets directly, due to economic hardships.

“Prices have reduced yet they are not buying. A box is selling at ¢300, but we buy at the farmgates for ¢200. If you factor expenses like transportation, loading fee and cost of boxes, you would realise that we’re incurring losses.”

“The farmers are complaining of the increase in fertiliser prices and other factors negatively affecting their operations. Hence they would rather come and sell directly to consumers,” she said.

DISCLAIMER: The Views, Comments, Opinions, Contributions and Statements made by Readers and Contributors on this platform do not necessarily represent the views or policy of Multimedia Group Limited.
Tags:
Pwalugu tomato factory
Tomatoes