Reviving a poisoned earth: How a fungus is giving hope to Ghana’s contaminated soil 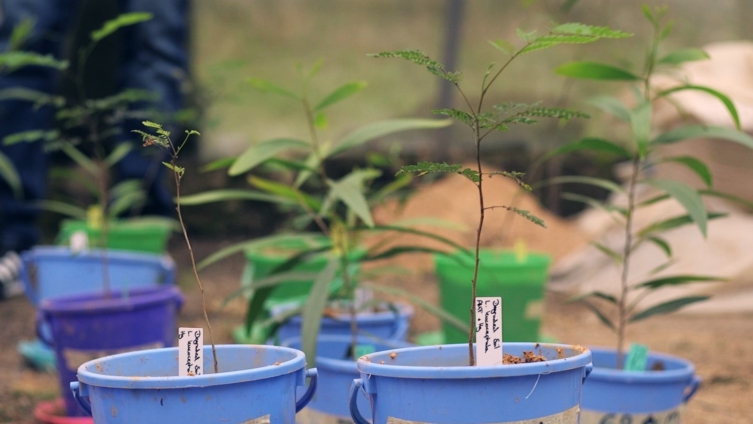 Millions of acres of land in Ghana are devastated by illegal mining or ‘galamsey’ activities.

The International Growth Centre (IGC) estimates 250 million dollars will be needed to reclaim the illegal-mining-devastated lands in the Western region of Ghana alone.

With sustainable management of the soil becoming crucial, a group of scientists in Ghana and Germany are using a fungus to bring life back to Ghana’s degraded soils.

At an abandoned land at Enumso, a farming community in the Asante Akim Central District of the Ashanti region of Ghana, the plant tropical kudzu (Pueraria phaseoloides) exerts invasive growth habit, pushing back the surrounding grasses and weeds. Not even the Mimosa pudica with its known creeping fame could pick a race.

Six years ago, when tropical kudzu had not set a node and vine in this area, illegal miners had made waste of the land.

Their activities stripped the land of its nutrients and exposed it to patchy mercury contamination. Mercury is used for gold extraction. Mercury does this by recovering pieces of gold mixed in soil and sediments. Mercury and gold combine to form what is known as an amalgam. Gold is then extracted by vaporizing the mercury.

However, waiting for the soil to regain its prowess can take many years. Therefore, a PhD student from University of Hohenheim (Germany), Enoch Opoku, thought of ways to accelerate the process using selected plant species to restore ecosystem services and make it useful again for crop production.

“We realized illegal mining degraded vast area of land. So after mining, it’s important that we reclaimed the site, and if we allow the site to revegetate by itself, it’ll take many years.

“So we thought that there are some leguminous plant species that have the potential to increase soil fertility, so farmers can use the area again,” he said.

He therefore introduced a leguminous plant species, Pueraria phaseoloides in addition to three other plants, that are, Gliricidia sepium, Leucaena leucocephala and Mucuna pruriens. Mucuna was, however, dropped because of its annual life cycle.

The main aim was to increase the soil carbon and also help fix nitrogen into the soils.

Mr. Opoku is happy with results as the soil has been enriched with organic matter making the soil darker.

Under the programme “CLIENT II – International Partnerships for Sustainable Innovations” financed by the Federal Ministry of Research and Education of Germany, the Hans-Ruthenberg Institute of Agricultural Sciences in the Tropics of the University of Hohenheim and INOQ GmbH in Germany, are collaborating with the Crops Research Institute of Ghana in research and development.

“With our collaborative project Mercury-AMF, we aim to develop sustainable and applicable plant-based technologies for soil fertility restoration and mercury reclamation (phytoremediation) of Ghanaian mining sites,” the project leader and agroecologist Prof. Dr. Frank Rasche of University of Hohenheim explained.

Led by a PhD student from University of Hohenheim, Nadine Sommer, the scientists selected Acacia mangium and Leuceana leucocephala as promising plant candidates.

Though Leuceana leucocephala led in the volume of organic matter produced, Acacia mangium was superior in terms of mercury salvaging.

“At the end, I was stuck with Acacia mangium and Leucena leucocephela.”

“Leuceana leucocephala produces much biomass, but Acacia mangium needs a bit more time to produce this biomass but it accumulates very huge amount of mercury. It’s not a hyper accumulator but a good accumulator of mercury,” she concluded.

Fungi may not hesitate to invade a dead or living plant, making naught of it, but in situations where they fall in love with each other, it becomes interesting to know the mutual gains.

Agape may refer to a true love affair between God and men but for green plants and fungi, it is called symbiosis.

Mycorrhizas, an important group of soil fungi, prefer to latch onto the plant’s roots, supplying water and vital nutrients to the plant, while the plant supplies the fungi with sugars. In this affair, sorry, it is not about emotions but food.

Though some fungi may prefer to make do on the surface, others would like to penetrate deep into the plant root cells. These are known as Arbuscular Mycorrhizal Fungi (AMF).

“Our industry partner INOQ GmbH characterized the candidate and tested it for its functional potential to survive under heavy metal exposure and support mercury uptake by plants,” Prof. Rasche said.

The isolated AMF candidate has been shown in research in the September 2021 edition of the Chemical Engineering Journal in cleaning up illegal mining sites bedeviled with chromium.

Another PhD student from University of Hohenheim, Yaqin Guo decided to bring Pueraria phaseoloides and the discovered AMF together to see how they can rid a contaminated soil of mercury.

She found that AMF help the plant to absorb the mercury and ensures optimum growth of the plant.

“Under low concentration of mercury, this AMF can help plants store this mercury while inhibiting translocation from the roots to the above-ground plant.

“When the mercury is high, AMF help plants to perform better and also increase translocation and distribution to the stem which is another purpose for clean soil,” she said.

Ms. Guo’s results have been corroborated in a Ghanaian study led by Dr. Beloved Dzomeku of the Crops Research Institute using Acacia mangium and Leucaena leucocephala.

The plants treated with AMF developed an extensive root system and exhibited enhanced growth as compared to the non-mycorrhizal plants despite the presence of mercury.

“The overall positive effect of AMF is clearly visible. And this also shows that we have better root growth helping biomass production of the plant.”

“The contrast is clearly seen with the non-AMF treated plants,” Prof. Rasche emphasized.

Triumphing in the pots, it has become essential the Enumso-originated AMF is brought back to its roots so that the natives would appreciate its charisma on degraded environment.

The scientists have therefore been meeting the chiefs and elders of the town to apprise them of the results and discuss ways to scale it up.

One of the farmers, Kofi Agyei was happy there is hope for degraded lands in their community.

He wants intense sensitization to lift the hope of the people.

“We’ve now realised that it’s not too late. We’re asking the scientists to come to the communities and tell them all is not lost,” he said.

Dr. Dzomeku believes there is “the potential to develop this AMF on a commercial scale and use it on illegal mining sites.”

“And the indigenous AMF can be used in our communities to revitalize the soil and make the soil better for agricultural purposes”.

Another PhD student from University of Hohenheim, Ferdinand Adu-Baffour also concurs, aside from a look at the legal framework, the economic potential of the initiative will encourage community participation.

“There should be a policy targeting contaminated lands and this must be specific to contaminants, reducing levels of danger that it causes to human health and the ecology.

“Community members and land owners will not be interested if there’s no business side to all these. This will be a motivating factor for them to involve themselves in this activity,” he said.

Therefore, Prof. Rasche is hinting, the team will among others be engaging nurseries to develop plantlets for farmers, build knowledge capacity and set the seed for entrepreneurships of young people.

“We may contact nurseries to develop the plantlets which are necessary for farmers.

“We’ll engage in the training and learning processes for young people, farmer teaching and we’ll use our industry partner INOQ GmbH in Germany who have the capacity to develop training programmes for interested stakeholders. Developed out of the project, this may lead to new business models and boost opportunities on entrepreneurship for young people,” he explained.

As both the Ghanaian and German governments are perplexed at ways to reclaim the land, Arbuscular Mycorrhizal Fungi (AMF) and leguminous trees give hope for an effective, sustainable and less costly technology to revitalize Ghana’s degraded lands.

DISCLAIMER: The Views, Comments, Opinions, Contributions and Statements made by Readers and Contributors on this platform do not necessarily represent the views or policy of Multimedia Group Limited.
Tags:
Arbuscular Mycorrhizal Fungi (AMF)
Crops Research Institute of the Council for Scientific and Industrial Research
Galamsey Menace
Illegal mining
University of Hohenheim