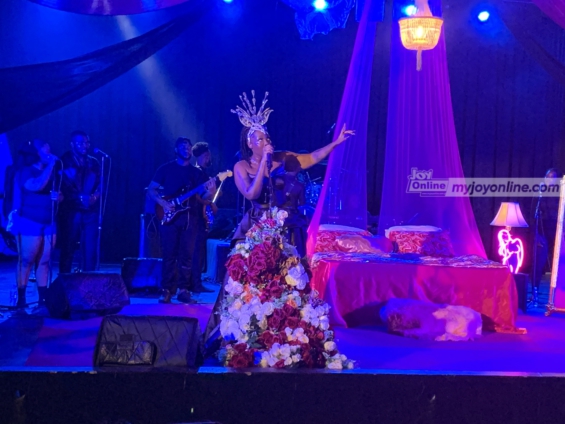 She dared to put up a dynamic set before the eyes of ardent enthusiasts in Accra on Thursday night.

The arena was flooded with hundreds seated to witness the spectacle the Cat Mama had in store.

The evening saw a medley of Ria Boss’ classics and recent hits as the audience sang atop their lungs at the Alliance Francais.

Some of the fans mobbed Ria near the stage while singing lyric-for-lyric.

Not @theriaboss giving sweet vibes tonight. And oh, where did @JoewackleGh come from with the Sugar Daddy handkerchief ? 😂 Loving the show tho ❤️ pic.twitter.com/1nbdh2Qs9R

The stage was embellished by a romantically embroidered bed flanked by The Musical Lunatics band.

It lit up the premises on Thursday night. The lights blended together with her detailed fancy costumes to create a cocktail of art.

The diverse mix of music audience danced throughout the night to the serenading melodies of Ria.

Some of her fans took to social media to share their excitement after the show.

“It’s a lifetime chilling experience. @theriaboss thank you so much,” Owuraku Jnr said on Twitter.

It’s a lifetime chilling experience. @theriaboss thank you so much pic.twitter.com/YepfONPlC1

The event also coincided with her birthday. For that matter, close friends of the musicians shared some words of encouragement. mid-show.

Earlier this year, she released her debut live album, “Remember” followed by a performance at the Live at the Warehouse series on July 7.

In all, it was a satisfying night of fun and finesse made possible by kittens of the Cat Mama herself.

DISCLAIMER: The Views, Comments, Opinions, Contributions and Statements made by Readers and Contributors on this platform do not necessarily represent the views or policy of Multimedia Group Limited.
Tags:
Alliance Francais
Cat Mama
concert
Ria Boss