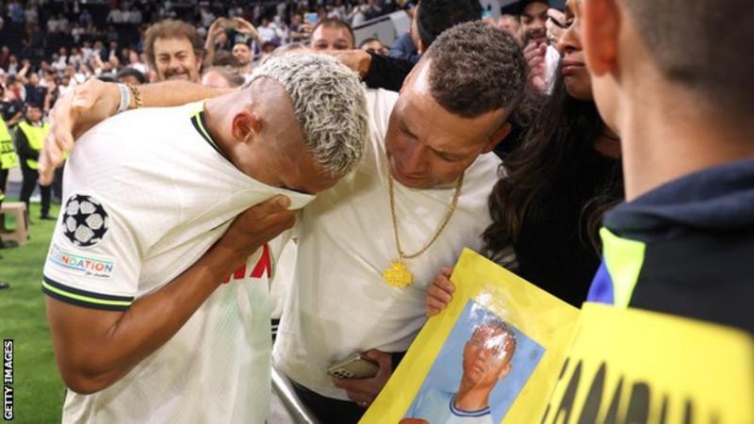 Richarlison had craved the moment and how it showed as he tearfully embraced friends and family at the end of his match-winning Champions League debut for Tottenham.

The talented 25-year-old had everything he wanted at former club Everton in terms of personal happiness and the adulation of supporters who loved the Brazil striker’s heart-on-sleeve approach.

What he did not have however – and was not going to get – was European football’s elite stage, and this was his ultimate ambition.

Richarlison won the hearts of Everton fans with his passion and significant contribution as they narrowly escaped relegation last season but in the end he wanted more than the Merseyside club, so often in a state of chaos and transition in recent years, could offer.

It made the parting of the ways inevitable and Richarlison made a £60m switch to Spurs.

He finally made the Champions League on Wednesday and what an impact he made, proving himself a powerful addition to manager Antonio Conte’s potent attacking armoury.

Richarlison was denied his first Spurs goal by VAR against Fulham on Saturday and that will have made opening his account in the Champions League group game against Marseille even sweeter.

Conte already has England captain Harry Kane, Son Heung-min and Dejan Kulusevski to call on but against a Marseille side digging deep it was Richarlison who made the decisive intervention.

Make no mistake, this player can be a divisive figure, whether he is hitting the deck too quickly on occasion or ball-juggling to the fury of opponents and opposition fans, as he did in Spurs’ recent win at Nottingham Forest.

This should not mask the special talent Richarlison possesses, bolted on to an insatiable desire for hard work and goals that endears him to his managers, team-mates and supporters.

He has already won favour at Spurs and the manner in which he pulled them out of difficulties as they made their return to the Champions League will only cement his popularity.

Spurs had to struggle long and hard, often way short of their best, to make the breakthrough against Marseille, who were composed and organised even after they were reduced to 10 men early in the second half when Chancel Mbemba was sent off for a professional foul on Son.

Enter Richarlison with a thumping header from Ivan Perisic’s cross with 14 minutes left and an even better one five minutes later as he glanced Pierre-Emile Hojbjerg’s delivery past Marseille goalkeeper Pau Lopez.

Richarlison said when he signed for Spurs: “I always said my dream was to play in the Champions League and now this dream will come true. Maybe I will cry because it will be a special moment. When the time comes I’ll be quite emotional.”

And he certainly was as he walked over to the sidelines at Tottenham Hotspur Stadium after making what was, as far as he was concerned, the perfect Champions League entrance.

Conte said: “I remember when Richy signed for us he said, ‘I can’t wait to play in the Champions League and listen to the music.’ When a player says these words it means he has great desire and great will.”

In the wider context, Richarlison’s performance and his two goals showed exactly why Conte was so keen to secure his signature as the Italian continues his relentless, fiercely driven pursuit of success.

Conte may appear to have plenty of attacking options but this is a manager who always wants more and he believes Richarlison will add and create goals this season. The manner in which he decided this game will only increase that conviction.

The Spurs manager said: “We signed Richy because we tried to sign a player that was able to play in all three positions. For this reason we hadn’t had any doubts to sign him. We did this quickly because our idea and vision was very clear, especially for this reason.

“Richy is more of striker than Deki [Kulusevski] but at the same time he can play in Son’s position, in Harry Kane’s position and Deki’s position. For us this is very important because for sure when you make rotation, you don’t drop the quality.

“I am happy for Richy because he deserved to have a night like this.”

Spurs have occasionally struggled this season but under Conte there is new steel that gives them the opportunity get the job done, whether it is earning a point in the 96th minute at Chelsea or fighting their own poor form to finally overcome Marseille.

This is a Spurs team that is starting to resemble their manager and when that manager is Antonio Conte that can only be a good thing.

Son is still searching for his brilliant best, which will surely return, but Richarlison’s arrival can compensate for that and certainly did here.

Spurs were desperate for a winning start, especially at home, in Group D. They should emerge successfully from a section also containing Sporting Lisbon and Eintracht Frankfurt but the first three points sets the platform and it was Richarlison who made sure they got them.

He was overcome by emotion at the conclusion of this victory but Richarlison can reflect on getting his Spurs career up and running in the most satisfactory fashion.

DISCLAIMER: The Views, Comments, Opinions, Contributions and Statements made by Readers and Contributors on this platform do not necessarily represent the views or policy of Multimedia Group Limited.
Tags:
Richarlison
Tottenham Hotspur
UCL