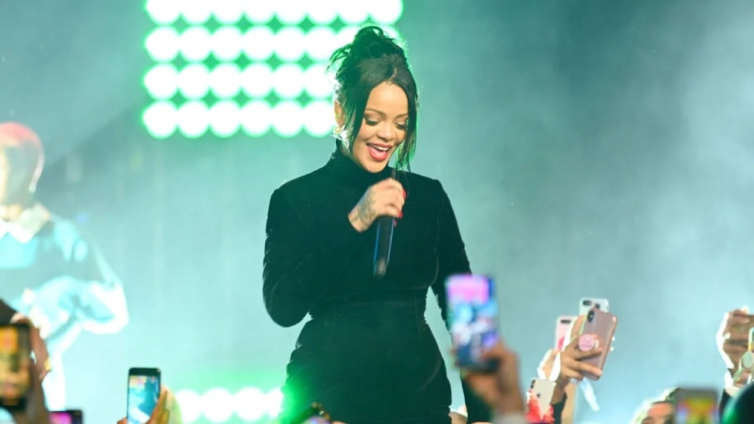 Rihanna has slyly affirmed that she will be performing at the Super Bowl LVII Halftime Show in Feb. 2023. Roc Nation also officially confirmed the singer’s participation through a statement released on Sunday.

The singer shared a picture of an NFL-branded football on her Instagram. The post came amid reports that the singer was “in talks” to headline the next Halftime Show.

The game, which typically draws one of the biggest single TV audiences of the year, is scheduled to be played at the State Farm Stadium in Glendale, Ariz. on Feb. 12.

“Rihanna is a generational talent, a woman of humble beginnings who has surpassed expectations at every turn,” said Jay-Z in the official announcement. “A person born on the small island of Barbados who became one of the most prominent artists ever. Self-made in business and entertainment.”

Although having Rihanna as a Halftime headliner is a logical conclusion on the Roc Nation front, the singer has not released an album since 2016.

She has commented vaguely about two different albums in the years since (and been photographed coming in and out of recording studios), with one being described as a dancehall album. However, details remain scarce.

Regardless, the announcement was enough to rile up fans of the R&B singer, who hope her primetime appearance means a new album is finally on the way. Rihanna was also offered to headline the 2019 Halftime show but turned down the offer in a decision to show solidarity with Colin Kaepernick.

“We are thrilled to welcome Rihanna to the Apple Music Super Bowl Halftime Show stage. Rihanna is a once-in-a-generation artist who has been a cultural force throughout her career,” Seth Dudowsky, NFL’s head of music, said in a statement. “We look forward to collaborating with Rihanna, Roc Nation and Apple Music to bring fans another historic Halftime Show performance.”

The Apple Music Super Bowl Halftime Show will be telecast and produced by DPS. Roc Nation and Jesse Collins serve as executive producers and Hamish Hamilton serves as director. Roc Nation is also serving as the strategic entertainment advisors of the live performance.

“Rihanna is an incredible recording artist who is a favorite for many millions of Apple Music customers around the world,” said Oliver Schusser, Apple’s vice president of Apple Music and Beats.

“We’re excited to partner with Rihanna, Roc Nation and the NFL to bring music and sports fans a momentous show — what an incredible artist for the inaugural Apple Music Super Bowl Halftime Show.”

This is the first year that Apple Music will serve as a sponsor for the halftime show, replacing the NFL’s longtime partner Pepsi. The NFL announced the move last week at midnight, which had fans hypothesizing that Taylor Swift would be a potential headliner due to Swift’s connection to the hour (Her forthcoming album is called “Midnights”).

That was later disproved by sources close to Swift, who spoke to both People and TMZ and alleged that, although she had been approached by the NFL in the past, the pop phenom had turned down the offer.

In May, Pepsi officially renounced its title as a halftime show sponsor, choosing to walk away from a decade-long association that transformed the event from a lineup of primarily rock musicians like Bruce Springsteen and Tom Petty and the Heartbreakers in favor of a new group of artists aiming at the younger generations that advertisers and the NFL seek to court.

The NFL was said to be seeking significantly higher annual payments for the sponsorship rights. According to a press release issued by the league, the contract with the software company is a multi-year deal.

Apple has in recent months shown a greater interest in sports. Its streaming platform has started new deals with Major League Baseball and Major League Soccer to show games to subscribers. Sports rights have long been the province of traditional media companies like Fox, Disney, Paramount Global and NBCUniversal, but technology companies like Apple and Amazon have made a bigger play for those rights as they seek to bring in consumers to their broadband subscription-video services.

Amazon, for its part, is now a major NFL partner thanks to its control of rights to “Thursday Night Football.”

Apple Music will be offering sneak peeks of its Halftime ideas via its social handle on TikTok, Instagram and Twitter.

DISCLAIMER: The Views, Comments, Opinions, Contributions and Statements made by Readers and Contributors on this platform do not necessarily represent the views or policy of Multimedia Group Limited.
Tags:
NFL
Rihanna
Super Bowl Halftime Show