Rotary Club of Accra-West donates to Kanda Cluster of Schools, Osu Children’s Home as part of its 52nd anniversary 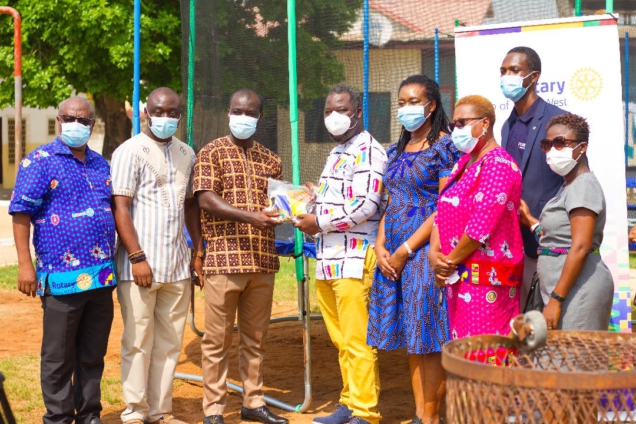 The Rotary Club of Accra-West has handed over extended washroom facilities to the Kanda Cluster of Schools as part of its 52nd anniversary.

The washroom was first built in 2018 with a shower, water closet (WC), urinal and hand wash basin for females. It also had four urinal basins and a handwash basin for the males.

This project is in line with the one of the seven focus areas of Rotary International in the area of water and sanitation.

Other focus areas include disease prevention and treatment, basic education and literacy, maternal and child health, economic and community development and environment.

He explained that it is for this reason that the Club has responded to the request for relocation of the entrance to the washroom facilities.

Mr Baah-Acheamfour said this will deny encroachers the use of the facilities use and the extended capacity makes it accessible to the pupils and staff during school hours.

The facilities were handed over to Isreal Martei, Head of Human Resources at the Municipal Education Office who represented the Municipal Director.

He expressed appreciation to Rotary for the continuous support to the cluster of schools.

The Headteacher of the school, Lucy Kudivor said the Parent Teacher Association (PTA) attempted to do the project yet they could not afford it.

She thanked Rotary Club of Accra-West for the kind gesture.

In a related development, the Rotary Club of Accra-West has donated two 15 feet trampolines to the Osu Children’s Home.

This is to afford the children an interim playground at the cost of ¢5,000.

Also, 150 re-useable facemasks partly sponsored by Wear Ghana were donated to the Home.

The playground at the Home which was last rehabilitated in 2006 with assistance from Rotary International, Rotary Club of Clifton, United Kingdom and Rotary Club of Accra-West is currently dangerous for the children to play within.

The cost of the rehabilitation which includes grass carpeting, fencing and playground items is about ¢90,000.

Mr Baah-Acheamfuor appealed to all friends of Osu Children’s Home to support the rehabilitation of the playground in cash, playground equipment, grass carpeting or fencing.

The Assistant Manager of the Home Reindorf Dartey thanked Rotary Club of Accra-West for the provision of the trampolines as interim play equipment and the facemasks.

He further appealed to the general public and corporate organisations to partner with Rotary Club of Accra-West to complete the rehabilitation of the Playground for the Home.

Rotary International is an international service organization whose stated purpose is to bring together business and professional leaders in order to provide humanitarian service and to advance goodwill and peace around the world.

It is a non-political and non-religious organization open to all. There are over 35,000 member clubs worldwide, with a membership of 1.3 million individuals, known as Rotarians.

DISCLAIMER: The Views, Comments, Opinions, Contributions and Statements made by Readers and Contributors on this platform do not necessarily represent the views or policy of Multimedia Group Limited.
Tags:
Kanda Cluster of Schools
Kwame Baah-Acheamfuor
Osu Children’s Home
Rotary Club of Accra-West