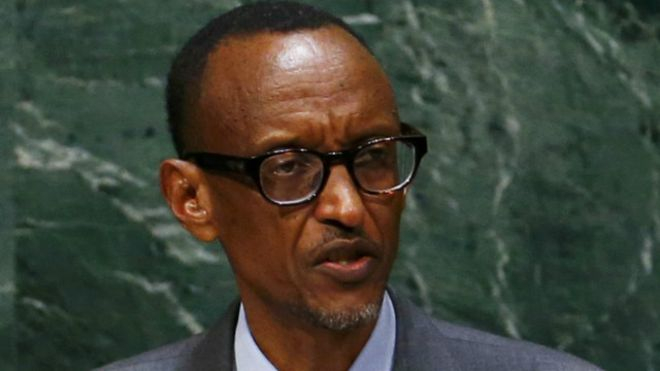 Rwanda's opposition Democratic Green Party has filed a lawsuit demanding the Supreme Court block any move by parliament to change the constitution to allow President Paul Kagame to run for a third term.

Kagame, whose second seven-year term ends in 2017, has said he opposes the lifting of a two-term limit but is open to staying on if people convince him. Several politicians and other petitioners have called for a change.

The debate about term limits and challenges to veteran leaders have flared in several places in Africa. The United States and other Western nations have been pressing African leaders to stick to constitutional rules on presidential terms.

In next door Burundi, protests have rumbled on for more than a month with opponents accusing President Pierre Nkurunziza of violating the constitution by seeking a third term.

Nkurunziza cites a constitutional court ruling saying he can run.Article 101 of Rwanda's constitution says the president's seven-year term can be renewed once and "under no circumstances" should a person hold the office of president for more than two terms.

"The Democratic Green Party of Rwanda demands the Supreme Court … to order the Rwandan parliament not to change Article 101 of the constitution," the party said in a statement, saying the party filed its lawsuit on Wednesday.

Kagame, who was elected in landslide elections in 2003 and 2010, has been seen as the country's most powerful figure since leading rebels into the capital in 1994 to end a genocide that killed 800,000 mostly minority Tutsis as well as moderates from the Hutu majority.

Kagame and his government have been criticized by rights groups for stifling media and political freedoms. Despite having several parties, they offer no significant opposition. The small Democratic Green Party is a rare voice of criticism.

Democratic Green Party head Frank Habineza has said that, alongside seeking to keep a two-term limit, his party wants presidential terms shortened from the seven years.

Speaking in neighboring Democratic Republic of Congo on Thursday, U.S. Assistant Secretary of State Tom Malinowski said: "Term limits encourage leaders to focus on leaving a good legacy, instead of perpetuating their own power."

"Term limits make it harder to build systems of patronage and corruption by ensuring political turnover, and they give new generations the opportunity to be leaders," he added.