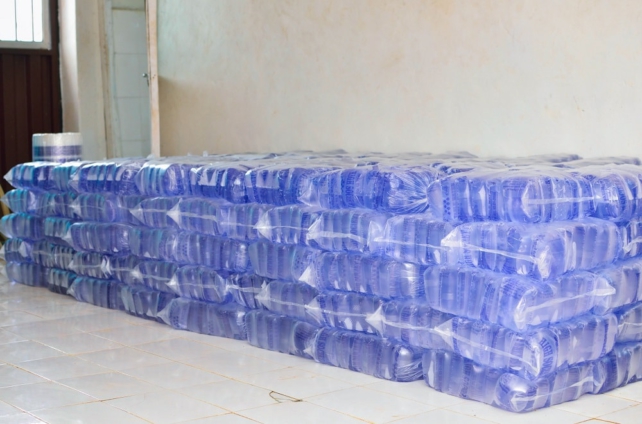 The Ghana Statistical Service has described as worrying the growing consumption of sachet water as its previous studies reveal significant faecal contamination in a number of the packaged water on the market.

The Service indicates that consumption of sachet water by households in Ghana has quadrupled in the last decade, from 9% to 37.4%.

However, its multiple indicator cluster survey in 2017 revealed that 34.1% of households had their sachet water contaminated with an appreciable amount of Escherichia Coli.

In 2010, pipe-borne water was pegged as the main water drinking source in most homes in Ghana.

But, the figure is reported to have reduced from 46.5% to 31.7% over the last decade with sachet water becoming the preferred source of drinking water.

According to the 2021 Population and Housing Census, about 37% of the 8.3 million households in Ghana consume packaged-sachet water as their main source of drinking water.

The figure represents a quadruple increase from 9% in 2010.

The consumption of sachet water is said to be prevalent in urban areas (72%) with five regions cumulatively recording higher rates than the national percentage points.

Greater Accra region recorded the highest (70.7%) use of sachet water for drinking while the North-East region was the lowest (1.8%).

However, the Ghana Statistical Service is worried the figure poses a public health threat as a number of water sources for packaged water production have been found to contain faecal matter.

Assistant Chief Statistician with the Ghana Statistical Service, Dr. Peter Takyi Peprah, was speaking at a stakeholder engagement in the  Water, Sanitation and Hygiene Sector.

The engagement in Kumasi was to keep stakeholders in the WASH sector abreast of the findings from the census to inform policy.

“The Food and Drugs Authority must embark on thorough monitoring and supervision of the production of these sachet water. They should try their best to test on regular basis the sources of water in the production of these waters. So that in case the water is contaminated they can advise them to change the source of water or close that company. They always say the water source is either spring water or underground water. Looking at the number of people drinking sachet water it can pose a public threat,” he suggested.

DISCLAIMER: The Views, Comments, Opinions, Contributions and Statements made by Readers and Contributors on this platform do not necessarily represent the views or policy of Multimedia Group Limited.
Tags:
Public Health
Sachet water