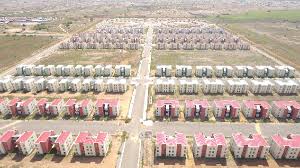 According to him, despite the poor conditions in which the abandoned site has been left in, it can still be revamped to serve its intended purpose.

He was replying to a statement made by the Ranking Member on Parliament’s Works and Housing Committee, Vincent Asamoah, who had alleged that the Housing Minister, Francis Asenso-Boakye, had justified the selling of the Saglemi Project because it was a failed project and a complete write-off.

Speaking on JoyNews’s PM Express, the GREDA President noted that while the site has largely been looted, it can still be salvaged but at great cost.

“Sure, it can be salvaged. Luckily the physical structures as we see from these pictures are still solid and so can be salvaged. The only thing is that it needs a cost revision which means that the projected cost will have to increase significantly because of these and so on and so forth.

“So it can be salvaged, it can be done but at a greater cost. It’s not a total write off, but at this stage it is seriously problematic,” he said.

Meanwhile, the Ranking Member on Parliament’s Works and Housing Committee, Vincent Asamoah, has called for an independent inquiry into the raiding of the Saglemi Housing Project by unknown persons.

According to him, it is unheard of that the site which is supposedly under the care of the police could have been looted so thoroughly without the police arresting any culprits.

JoyNews had been to the site and discovered louvre blades, window glazing, kitchen sets, doors and panels, as well as electrical wirings among many others have all been stolen from the site.

Speaking concerning the situation, Vincent Asamoah said it was important to get to the root of what had happened at Saglemi.

“Everything has been removed. They pulled all the cables from the wall. So we are asking that even before we take a decision on that there should be an independent probe into this to find out why these things happened.

“Because after I encountered some of the Ministers, one of the Deputies said, ‘oh we handed the place to the police to handle.’ So if you have the police taking care of the place and all these things are gone, do we have to leave it like that?” he said on PM Express.

DISCLAIMER: The Views, Comments, Opinions, Contributions and Statements made by Readers and Contributors on this platform do not necessarily represent the views or policy of Multimedia Group Limited.
Tags:
Ebo Bonful
Saglemi housing project