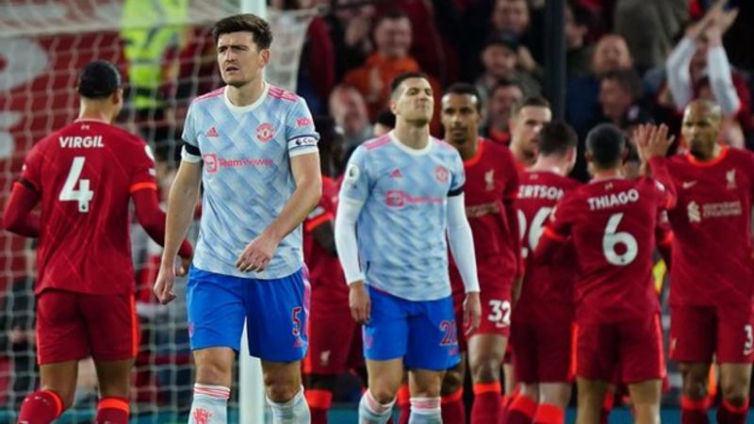 Liverpool outclassed a desperate Manchester United in an embarrassingly one-sided affair at Anfield to go top of the Premier League.

Manchester City can regain their place at the summit against Brighton on Wednesday but this was another thrilling reminder of how Jurgen Klopp’s team are determined to chase them down in the hunt for a historic quadruple.

It was also a graphic illustration of the giant task facing United’s manager-elect Erik ten Hag as United were run ragged by the Liverpool powerhouse, the gulf in quality and attitude between the sides a chasm.

United were without Cristiano Ronaldo following the death of his newborn son and both sets of supporters paid a moving tribute with applause in the seventh minute.

Liverpool were already in front by then, Luis Diaz sweeping home Salah’s pass before the Egyptian ended his eight-game goalless sequence from Sadio Mane’s brilliant pass after 22 minutes.

Mane ended any slim hopes United had of making this a challenging evening for Liverpool with a first-time finish from Diaz’s pass in the 69th minute before Salah completed the rout with five minutes left.

After their 5-0 win at Old Trafford in October, Liverpool are the first club to score at least eight Premier League goals against United in a single season.

The victory moves Jurgen Klopp’s side two points clear of defending champions City, who have seven matches left to play before facing Brighton at Etihad Stadium on Wednesday. It also confirmed they will play Champions League football next season.

United, who could have moved level on points with fourth-placed Tottenham, remain sixth. On Saturday, the Red Devils go to fifth-placed Arsenal.

Liverpool are on an ominous roll and, as against Manchester City in Saturday’s FA Cup semi-final, the game was effectively won by half-time following a blistering first 45 minutes.

United were on the rack from the first whistle and were swept away by wave after wave of Liverpool attacks, all conducted from midfield by the master orchestrator Thiago Alcantara.

Urged on by an exultant Kop, Liverpool simply overwhelmed United as they were quicker, slicker and simply in a different class to their fallen rivals.

Thiago’s midfield masterclass earned him a standing ovation when he was replaced by Naby Keita but the performances of Diaz, Mane and Salah were of a similar standard.

Liverpool have thrown down the gauntlet to reigning champions City before their next game and it is hard to see who will find a way to beat them in this type of form.

They have won the Carabao Cup, will face Chelsea in the FA Cup final, are breathing down City’s neck in the league and are favourites to progress against Villarreal in the Champions League semi-final.

And the way Liverpool are approaching the decisive stage of the season in such prime condition, nothing looks beyond them.

There can be no consolation for United in this abject performance, apart from maybe the fact that Liverpool finished a goal short of inflicting their second 5-0 defeat of the season on the old enemy.

It was still Liverpool’s biggest “aggregate” victory over two games in a league season against United, a statistic that does not exaggerate just how far they are adrift.

Make no mistake, it could have been five and more, Liverpool going off the boil for the early part of the second half before returning to the rampant form of the first half to finish United off.

Interim manager Ralf Rangnick has been brutal about his side’s failings and they will soon be Ten Hag’s problem – and this was so bad it is hard to know where to start.

United were without Ronaldo and were so reduced that defender Phil Jones was drafted in for a rare start. He deserves sympathy rather than criticism because this was the very definition of a hiding to nothing and it was no surprise when he was replaced at half-time.

Liverpool were vastly superior, which can happen, but what was inexcusable was United’s lack of fight, heart and even tackling as they looked a beaten team from the moment Diaz put them behind.

There was a very slight improvement after the break – it could not get worse – but even so this was a performance coupled with a dreadful attitude that was an embarrassment to a club of Manchester United’s stature.