If that sounds familiar, that’s because it’s the same basic pitch as Apple’s iPad Pro and Microsoft’s Surface Pro. Like those tablets, the Tab S6 supports pen input (a stylus is included in the box) and it can be attached to an optional keyboard case. It will be available starting on September 6th for $649, which gets you 128GB of storage and 6GB of RAM. A version with 256GB of storage and 8GB of RAM will cost $729. Samsung says an LTE version of the Tab S6 will be available later in the year.

The Tab S6 sits at the top of Samsung’s current Android tablet range, which includes the low-end Galaxy Tab A and the midrange Tab S5e released earlier this year. (The company maintains a separate line of tablets that run Windows 10, just to complicate things.) It has a 16:10 10.5-inch OLED screen (2560 x 1600 pixel resolution), similar to the outgoing Tab S4, but Samsung has trimmed the bezels a tad to make the overall footprint smaller. It has also traded the facial recognition login system for an in-screen optical fingerprint scanner.

Samsung has also trimmed the overall thickness and weight of the tablet down to 5.7mm thick and 420 grams (just under 15 ounces). There are four speakers along the edges, two on each side when the tablet is held in landscape. Inside, the Tab S6 has a Snapdragon 855 processor and a 7,040mAh battery that the company says is good for up to 15 hours of use. 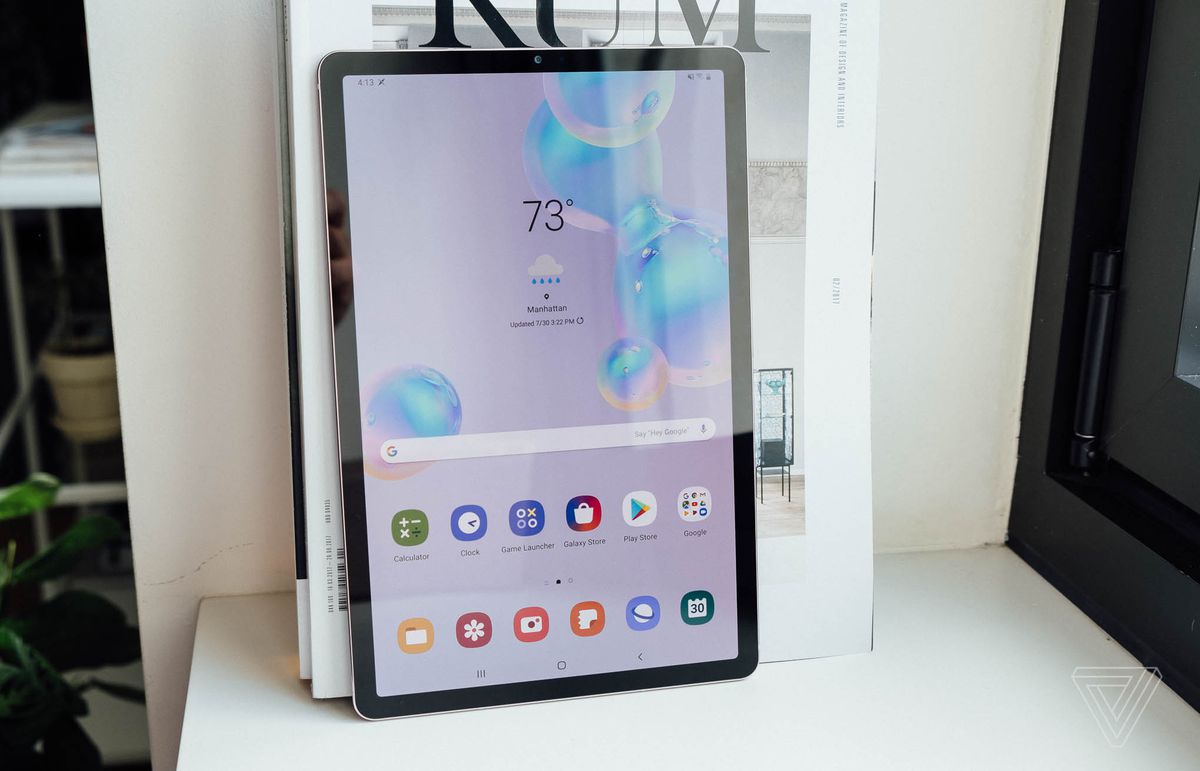 Around back, the Tab S6 has a dual-camera system with a standard lens and a 123-degree wide-angle lens. The back is also home to the most interesting part of the tablet: a magnetic strip that lets the included S Pen stylus attach to the tablet. Like the iPad Pro and the Apple Pencil, the S6 can charge the pen when it’s attached and it even has a similar on-screen charging notification when you attach it. But sticking the stylus on the back of the device is far more clumsy than on the side, and in my brief time using the tablet, it was very easy to knock the stylus off the back while holding it. Samsung’s optional keyboard and folio cases have a cavity to cover the stylus and will likely do a much better job of keeping it attached than just the magnets alone.

The S Pen stylus has similar remote-control features as the S Pen that comes with the Galaxy Note 9 smartphone, including the ability to advance PowerPoint slides or trigger the camera shutter remotely. There are also new gestures for scrolling through media and other functions while holding the pen. It’s likely that these gestures will also be available on the new Note 10 smartphone when it’s announced next week. 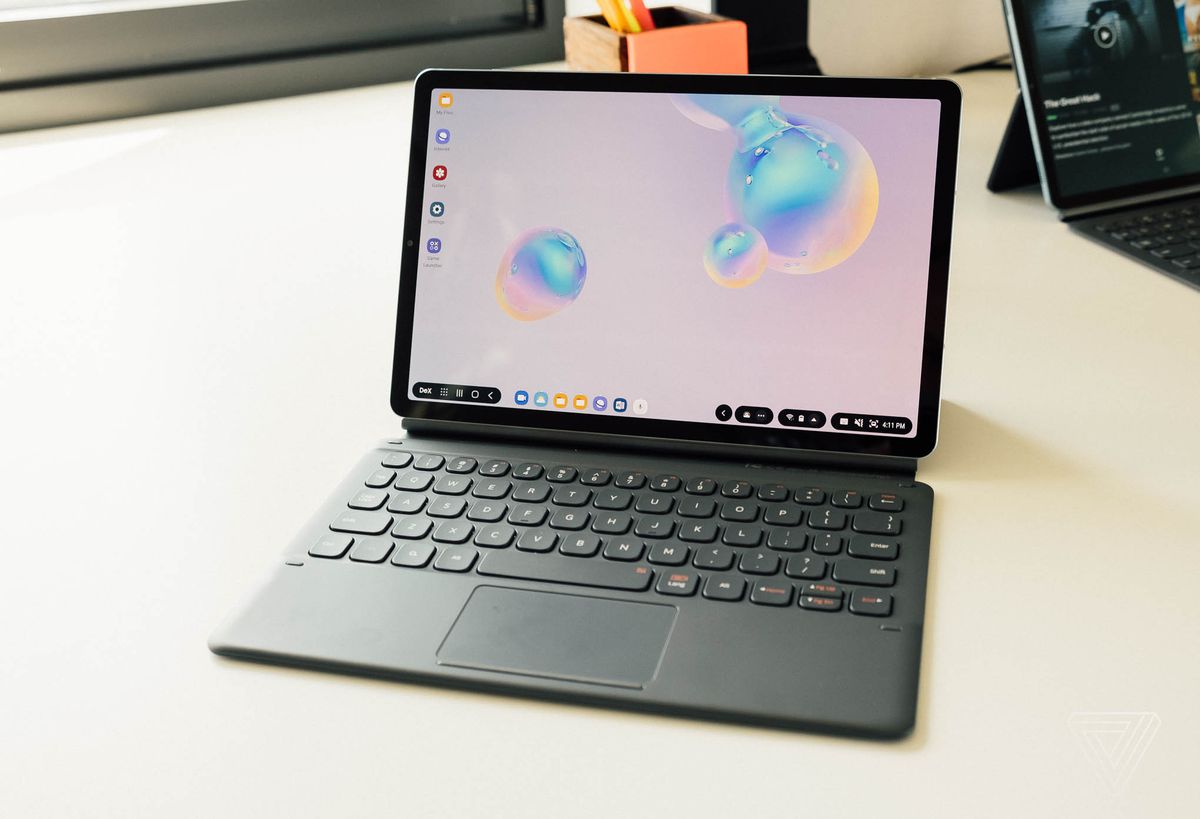 The Samsung Galaxy Tab S6 with its optional keyboard attached.

Samsung has redesigned the keyboard attachment to include a small trackpad. The keyboard, which can be purchased for an additional $179, connects to the tablet through a set of pogo pins on the left edge of the Tab S6. It can be detached separately from its back cover, which also acts as a kickstand to prop the tablet up.

For software, the Tab S6 runs Android 9 Pie with version 1.5 of Samsung’s OneUI interface. It also has support for Samsung’s DeX interface, which provides a more desktop-like experience when using the tablet with a keyboard. The new keyboard attachment has a function key to launch DeX quickly. DeX can also be outputted to an external display using the Tab S6’s USB Type-C port.

In terms of size and features, the Tab S6 compares closer to Apple’s most recent iPad Airthan the more expensive iPad Pro. But the Air starts at a lower price and has a much more developed operating system and app ecosystem than the Tab S6. As with most of Samsung’s high-end tablet efforts for the past few years, it’s hard to see why anyone would choose the Tab S6 over Apple’s options. We’ll have a better idea of how well the Tab S6 stacks up against Apple and Microsoft’s tablets once we’ve had a chance to put it through a full review, so stay tuned for that.