Scandal! Waste bins contract to Jospong may be inflated by GHS130m

Joy News can report that a contract awarded by the Ministry of Local Government and Rural Development for the procurement of one million waste bins and disposable bin liners has been inflated by at least 130 million Ghana Cedis.

After nine months of investigations, Joy News found that all the five companies handpicked by the ministry to supply the waste bins are subsidiaries of the Jospong Group of companies. In the first of our comprehensive investigative series titled Robbing the Assemblies, Manasseh Azure Awuni finds the Office of the President, the Local Government ministry, and the Jospong Group are involved in the questionable waste bins contract.

The cost of the one million waste bins is $60 million while the cost of the bin liners is $14, 040,000. These amounts do not include Value Added Tax. The contract was awarded through sole sourcing, with approval from the Public Procurement Authority (PPA).

A letter, written by then sector minister, Collins Dauda, to the PPA cited urgency as the justification for using the single source procurement method. He said the bins were urgently needed because it was approaching the rainy season and there was the possibility of cholera outbreak.

This letter of approval from the PPA is dated 27th October 2016 when the nation typically is expected to be experiencing dry season. Nevertheless, the PPA approved the sole-sourcing method and the contract was awarded to the five companies:

Joy News investigation has revealed that all five companies are subsidiaries of the Jospong Group owned by Joseph Siaw Agyepong of Zoomlion. The President of the Ghana Institute of Procurement and Supply, Collins Sarpong, is questioning the procurement method.

"Once you have identified more people within the market, why use sole-sourcing?”he asked.

He said if there was an urgent need to supply the waste bins, the ministry could have used restrictive tendering. He said it was curious that as many as five companies belonging to the same group were contracted to supply the same product.

At the 10th anniversary of Zoomlion last year, Joseph Siaw Agyepong announced that his company would distribute free bins to Ghanaians in 2017.

But it appears the cost of the bins is going to be borne by the state and not an act of kindness by Joseph Siaw Agyepong as his speech suggested. Joy News investigation has revealed that the cost of the contract may have been inflated.

A pro forma invoice Joy News secured from the Universal Plastic Product and Recycling Ltd, a subsidiary of the Jospong Group, quoted the cost of a bin of this size as GHc150. An earlier contract awarded by the Local Government Ministry for the supply of waste bins and sighted by Joy News charged GHc15 to transport each waste bin.

This is about GHc88 million higher than the actual estimated cost. This could be as high as GHS103m (GHc15 million more) if compared with the prices advertised by other waste bin suppliers used by the ministry by the ministry previously.

Joy News investigation has revealed that the ministry was instructed by the Office of the President to procure the waste bins for distribution to households. In a letter dated September 15th 2016, then Chief of Staff, Julius Debrah, directed the minister to take steps to “procure an initial one million litter bins” for household distribution.

"Reports reaching the Presidency, however, indicate that the indiscriminate littering of waste is still a very big challenge confronting the MMDAs [metropolitan, municipal and district assemblies] and the country as a whole. The indication is also that most households lack disposal facilities such as litter bins and hence they resort to dumping in open places and particularly in open drains  … To reverse this serious challenge, your ministry is to take necessary action to facilitate the procurement of an initial One Million litter bins for distribution to households to be used for waste disposal,” the Chief of Staff stated.

The ministry of Local Government and Rural Development as well as the minister in charge at the time of the contract, Collins Dauda, have declined to comment on the matter. 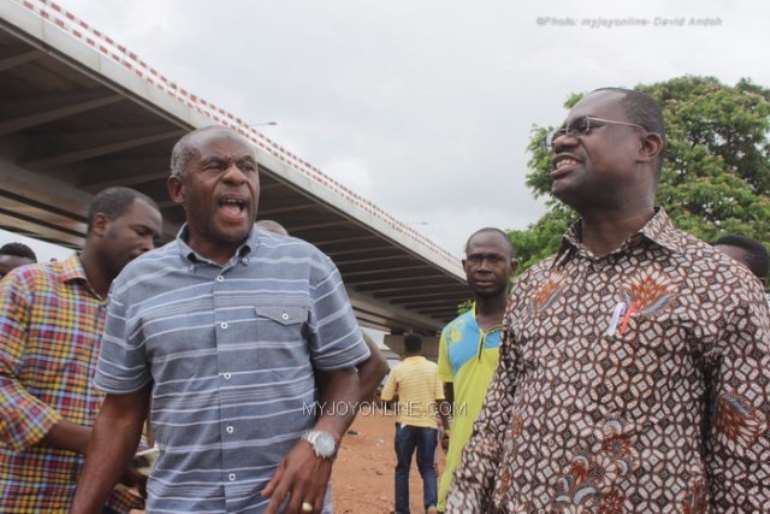 But further investigations by Joy News reveal there is something about this contract that may be as equally scandalous as the inflation of the contract sum.

Editors note: Joy News will, in the coming days and weeks, bring you a comprehensive investigation into how Ghana is losing hundreds of million of cedis in questionable sanitation contracts with the assemblies. It is a special investigative series by Manasseh Azure Awuni titled Robbing the Assemblies.