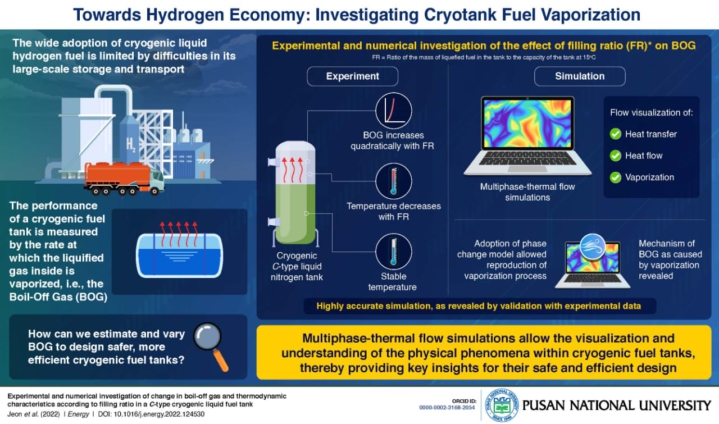 South Korean scientists have used the multiphase-thermal simulation technique to conduct an experiment that could speed up the development of safe and efficient commercial cryotanks for liquefied hydrogen.

The researchers used multiphase-thermal flow simulations to investigate the heat flows and phase changes within a cryogenic fuel tank, revealing key insights for their safe and efficient design.

The researchers looked into how the vaporization and heat flows within the fuel tank change depending on the tank filling ratio (the average mass of gas in kg per litre of tank capacity (kg/l).

The research has a wide range of applications, from automobiles and aerospace to offshore powerplants, making it a critical step forward in the realization of a hydrogen-centered society.

Hydrogen is widely regarded as the future fuel. However, when it comes to large-scale, commercial transport and storage, there are still challenges and safety limitations to improving the storage efficiency of liquefied hydrogen fuel.

Concerns about climate change have heightened the urgency of shifting away from fossil fuels and toward alternative energy sources. Hydrogen fuel is thought to be the most promising for the transportation industry.

Currently, hydrogen fuel is transported in specialized tanks as a high-pressure gas. However, this method is inefficient and raises serious safety concerns.

Only cryogenic tanks (cryotanks) with temperatures below -253⁰C—the boiling point of hydrogen—can transport the product.

Despite thermal insulation (heat protection), the liquefied fuel in a cryotank vaporizes to some extent, and the flow rate of vaporization, according to experts, is measured as “Boil-Off Gaso (BOG).” Scientists say that, excessive internal pressure inside the tank can cause cracks and fissures if the BOG is too high. Therefore, understanding and controlling BOG is critical in cryotank design.

A team of researchers led by Professor Jong-Chun Park of Pusan National University in South Korea investigated how BOG varies with another critical design parameter known as tank filling ratio (FR)—the ratio of the mass of liquefied fuel in the tank to the tank’s capacity at 150 degrees Celsius.

“In our study, we performed experiments, as well as simulations, to analyze the thermodynamic characteristics of the tank,” says Prof. Park.

The researchers then used computational fluid dynamics to simulate the tank’s multiphase-thermal flow to able to easily visualize heat transfers, thermal flows, and vaporization within the vacuum-insulated tank as a result of this.

“We adopted the Rohosenow’s phase change model for the simulations, which allowed us to reproduce the vaporization process within the tank. From our simulations, we were finally able to reveal the mechanism of BOG as a result of vaporization,” explains Prof. Park.

From the 18th century’s industrial revolution to the present, widespread use of fossil fuel-based energy sources has had a negative impact on the environment.

According to the UN Environment Outlook’s 6th Global Environment Outlook Report in 2019, global annual CO2 emissions from fossil fuel use in 2015 increased about five times over 1960, and the average carbon dioxide concentration in the atmosphere has broken out of the 800-thousand year cycle of repeated thawing and interglacial periods.

Several global climate agreements have been signed in response to these rapid climate changes. The Paris Agreement aims to limit the global average surface temperature increase to 1.5° Celsius or less by 2100. To achieve this, a 45% reduction in CO2 emissions must be achieved by 2030 compared to 2010, and ‘Net-Zero’ emissions and absorptions must be achieved by 2050.

According to Global Warming of 1.5°C, a special report published by the Intergovernmental Panel on Climate Change (IPCC) in 2018, in order to achieve ‘Net-Zero,’ greenhouse gas emissions must be reduced by 75-90% by 2050 compared to 2010, renewable energy must supply 70-85% of electricity generation, and the ratio of low-carbon energy sources used in transportation must be increased by 35-65%. Renewable energy based on primary natural energy sources such as wind power, solar power, and hydropower is becoming more popular in developed countries, accounting for 27% of global electricity production in 2019.

However, such renewable energy is not uniformly supplied, the energy is produced in a limited number of locations, and its low energy density makes it nearly impossible to use as a fuel for the transportation industry, which requires a constant supply of energy.

Hydrogen fuel in the transportation industry

Hydrogen is regarded as a promising future fuel to replace fossil fuels in the transportation industry due to benefits such as higher energy density, the ability to supply constant energy without time or space constraints, and the fact that it does not emit greenhouse gases during the power generation process.

But scientists say, the most popular hydrogen storage method currently in use employs high-pressure hydrogen gas, which is unsuitable for large-scale transportation due to poor safety and storage efficiency. This is why experts indicate the need for large-scale storage and transportation technologies development and commercialization.

The storage method for converting it to ammonia and the method using liquid hydrogen (LOHC) both have the advantage of storing the hydrogen at room temperature or close to room temperature, allowing for long-term storage without loss; additionally, the infrastructure for the diesel and ammonia processes is already in place.

However, to use the stored hydrogen, dehydrogenation and decomposition processes that require high energy are needed. In addition, due to the low transport efficiency of the LOHC as well as the toxic problem of the storage method using ammonia, these methods are limited in general use, and it is difficult to use them for high-purity hydrogen. Therefore, these hydrogen storage methods remain in the early stages of development and are not ready for commercialization.

According to researchers, the liquefied hydrogen storage method has a high energy storage density, is more stable than the high-pressure gas storage method, and can be used to obtain high-purity hydrogen without any special process. In situations where hydrogen is directly required, it is the most efficient and cost-effective of the three storage methods listed above.

It does, however, have some drawbacks, such as the fact that the inside of the storage tank must be kept at or below the vaporization point temperature of hydrogen (253 °C) based on atmospheric pressure in order for hydrogen to be stored in a liquefied state, and the energy required to cool hydrogen to a cryogenic liquid state from room temperature equates to approximately 35% of the total available energy for a given amount of hydrogen.

Research revealed that, to popularize the liquid hydrogen storage method, a high-level insulation technique must be developed to prevent further loss due to vaporization in cryogenic storage. The use of liquid hydrogen as a fuel in large transportation vehicles (ships, aircraft, space rockets, etc.) with fuel tanks with small surface-to-volume ratios is being investigated.

Other published research papers indicate that, the amount of vaporization that occurs in the cryogenic storage tank raises the internal pressure, which may cause cracks and fractures in the storage tank internal bulkhead or transport pipe, requiring proper discharge and reprocessing of the vaporization amount.

They say, because the amount of vaporization in cryogenic fuel tanks must be estimated while taking into account the variable fuel supply based on the output of the vehicle using fuel and the fuel filling rate over time, a more advanced vaporization quantity estimation technique than that of the conventional storage tank is required.

DISCLAIMER: The Views, Comments, Opinions, Contributions and Statements made by Readers and Contributors on this platform do not necessarily represent the views or policy of Multimedia Group Limited.
Tags:
Cryotanks
Liquified Hydrogen
South Korea