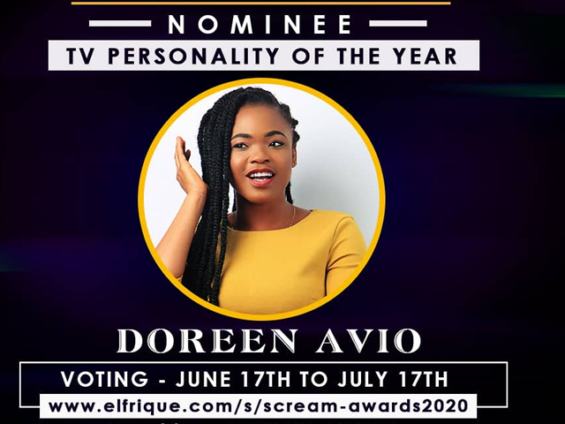 Award-winning Radio and Television personality Doreen Avio has been nominated for the 2020 edition of the Scream All Youth Awards.

The awards ceremony which is in its 7th year held annually in Nigeria is to recognise the youth with the focus on entertainers and entrepreneurs who have been outstanding in their field of work.

The JoyNews and Hitz FM journalist was nominated in the best TV Personality of the Year category.

Doreen Avio has been nominated alongside her colleague at the Multimedia Group Limited’s Adom TV/FM, Sister Sandy.

Other Multimedia journalists also nominated for a Scream All Youth Awards include Naa Adjeley Doku and Catherine Asamoah also known as King Kady for the category of On-Air Personality Award(Radio).

The brain behind the award, Jimmy Coker, has expressed excitement about the inclusion of top personalities from Ghana adding that the Scream Awards is not only limited for Nigeria.

He stated that over the years, they have included personalities from other parts of West Africa and have so far been impressed with responses from personalities so far.

“We are impressed by the response and reactions, we wish all nominees the best because from all indications it has been well received which we can further evaluate that we have nominated the best from the best from Ghana,” he said in an interview with JoyNews.

Organisers have also stated that due to restrictions caused by the Covid 19 pandemic, the awards will take place in Nigeria but they will also stream for their international audience on all their social media platforms.

Mr Coker added that plaques will be given to winners after the event.

Fans, he said, have the opportunity to vote for their favourite personalities from June until August.