Sea turtles rescued in Texas released back into ocean on slides 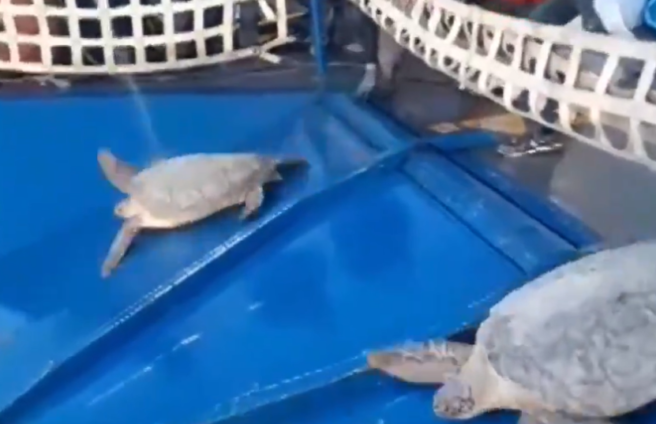 Thousands of turtles have been released back into the sea after they were rescued during the winter storm that hit Texas and other southern states.

Last week, freezing temperatures cold-stunned the creatures and impacted their ability to swim or feed resulting in a massive rescue mission to save them.

Now, video footage from Texas Sealife Centre shows the turtles being released down a wet slide into the Gulf of Mexico.

20 miles off Texas, finally warm-ish waters. 62° – a perfect spot to return the first 2200 of 5300+ rescued sea turtles. The cold weather stunned the turtles that would have otherwise drowned had volunteers with @SeaTurtleInc not responded. @TODAYshow pic.twitter.com/yhQ8vgNGBZ

The organisation cared for almost a thousand of the marine creatures after the storm brought record cold temperatures to the Lone Star State.

Jamie McWilliams from Texas Sealife Centre said around 200 turtles were released into the sea on Monday.

Another organisation, Sea Turtle Inc, also shared footage of thousands of sea turtles being released into the Gulf down blue wet slides.

It said that “thousands of community members bundled up and volunteered long hours” to aid in the rescue. “Many with no electricity, water, or warmth in their own homes still assisted Sea Turtle Inc.”

Residents, some of whom didn’t have heat or basic amenities in their own homes due to the unusually chilly weather, rescued the cold-stunned sea turtles and dropped them off at a convention centre last week.

“Every 15 minutes or less there’s another truck or SUV that pulls up,” said Ed Caum, executive director of the South Padre Island Convention and Visitors Bureau.

He said people were bringing one or two sea turtles, and sometimes more. “We had trailers full… coming in that had 80, 100, 50,” he said.

The convention centre started receiving the turtles after its neighbour, Sea Turtle Inc, became overwhelmed with the numbers being brought in.

Mr Caum said they had “collected” more than 3,500 sea turtles, but said he hesitated to use the word rescued because “we know we’re going to lose some”.

The extreme winter weather prompted US President Joe Biden to declare a major disaster in Texas.

The state’s power grid was crippled due to the cold, and, despite Texas being rich in oil and gas, millions of residents were without power for days.

There have been major disruptions to water supply, with more than 1,200 public water systems having problems.

More than 7.9 million people in Texas in 202 counties were still having issues with their water supply as of Monday evening, a spokesman for the Texas Commission on Environmental Quality said.