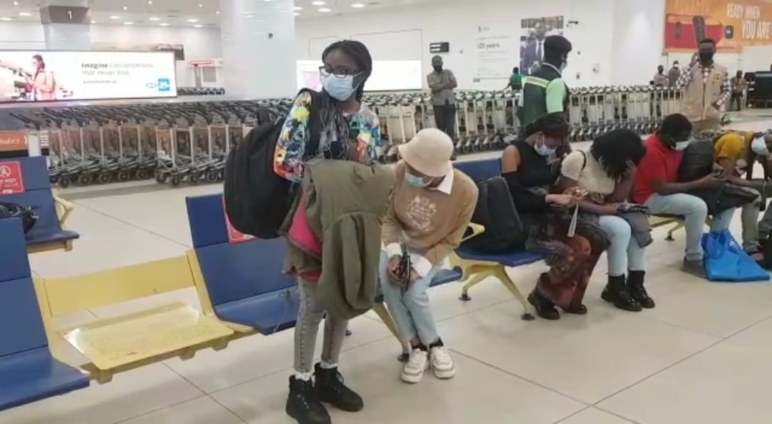 The second batch of Ghanaian nationals who escaped from Ukraine to Poland for refuge, including students, has arrived in Accra.

Twenty-four of them arrived at the Kotoka International Airport (KIA) on Friday morning.

These persons were rescued through Poland by land due to the shutdown of Ukraine’s airspace since the beginning of the unrest in the country.

They were welcomed by the Deputy Minister of Foreign Affairs, Kwaku Ampratwum-Sarpong.

Due to government’s efforts, on Tuesday, March 1, the first batch of Ghanaian nationals evacuated from Ukraine arrived home. This batch was also welcomed by Mr. Kwaku Ampratwum-Sarpong.

Also, Ranking Member on the Foreign Affairs Committee in Parliament, Samuel Okudzeto Ablakwa, on March 3, met with Ghanaian students who were evacuated from Ukraine to Romania for refuge.

At Bucharest on Wednesday, Mr. Ablakwa, who is also the MP for North Tongu interacted with his compatriots when he hosted them for lunch. He used the opportunity to assess their current conditions.

According to him, this is to help understand their situation and the steps government should take to assist them.

“I do this not merely because it is a constitutional imperative of oversight imposed on Parliamentarians; there is a higher obligation of our common humanity and nationhood. I have been greatly inspired by the amazing stories of survival and resilience as narrated by our heroic compatriots,” he added.

The MP indicated that Romania now hosts the largest number of Ghanaian students. An estimated number of 200 students are expected to be flown to Ghana.

DISCLAIMER: The Views, Comments, Opinions, Contributions and Statements made by Readers and Contributors on this platform do not necessarily represent the views or policy of Multimedia Group Limited.
Tags:
KIA
Poland
Ukraine