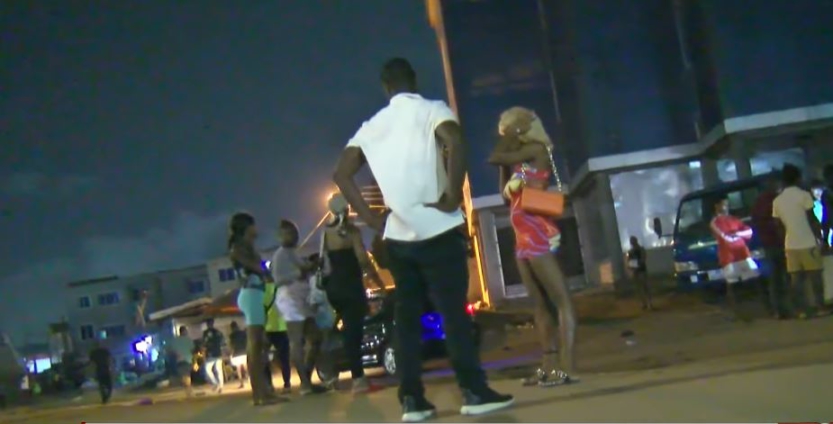 Traditional commerce seems not to be the only sector suffering the pinch of Ghana’s economic meltdown.

One of the oldest professions, commercial sex work, is also bearing the brunt of the current downturn.

Players on the streets of Accra have been compelled by the prevailing economic situation to increase the price of their services.

The majority of them are from countries such as Nigeria, Ivory Coast, Liberia among others.

Until recently, many of them say they had been charging ¢50 for a short session that lasts between 15-20 minutes and as much as ¢300 for a full night.

Despite their courageous approach to the trade, they always meet some clients who make them question their choice of work.

However, their woes are worsening and the reason emanates from the most unlikely of sources.

Fuel prices have crossed the ¢10 mark affecting prices of commodities while the dollar has also seen a record-high appreciation to the cedi.

In the face of all these conditions, sex workers in the capital told JoyNews that they are not in the position to satisfy their clients at the same rates they initially charged.

A report filed by Latif Iddrisu revealed that many of them have increased their charges by up to 100%.

Lapaz, Cantonments, Osu, East Legon are a few hotspots for the trade.

One of them, Vivian, said though sales were slowing down gradually, her income saw a brief uptick at some point in December last year as she “was taking ¢200 for short.”

But the new year came with a very uncomfortable situation, creating the need for a commensurate upward adjustment in her charges.

“There has been an increase in goods lately. To pay my rent is difficult now and because of that, I have increased my price,” she said.

“Food these days is very expensive. I clothe myself, and the rest of that. So I can’t reduce my price.”

But this insistence on not backing down on her new rates is now beginning to cut both ways.

This is because the same financial challenges that the country is facing are holding her clients from seeking her services.

“That is chasing my clients away,” she lamented.

She pleaded with authorities to provide austerity measures that will ensure a flourishing economy.

“Things have become very difficult for us so they should reduce some of the goods.”

Finance Minister, Ken Ofori-Atta, is expected to communicate key measures and reliefs sanctioned by government to recover the economy later this week, after a crunch three-day Cabinet retreat chaired by President Akufo-Addo.

According to the Information Ministry, details on some of the reliefs will include the reopening of land borders, the easing of Covid-19 restrictions, and measures to arrest the depreciating cedi.

While these interventions are yet to kick in, clients of these sex workers may have no option but to find a middle ground between satisfaction and financial muscle.

But for their rates, the only way is up.

DISCLAIMER: The Views, Comments, Opinions, Contributions and Statements made by Readers and Contributors on this platform do not necessarily represent the views or policy of Multimedia Group Limited.
Tags:
Charges
Economic hardship
Sex work