Sheriff Quaye to begin recovery on an ‘unfriendly ground’? 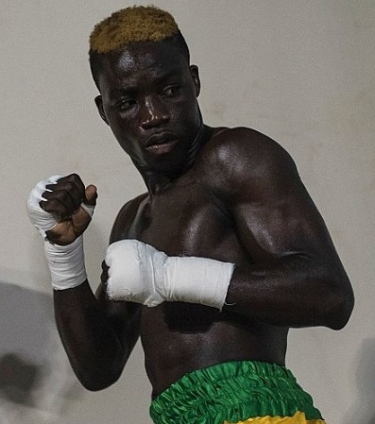 On the night of October 20 in 2018, Sheriff Quaye dazzled fans in a packed Bukom Boxing Arena and with his superior skill which saw him overcome his long time ring foe, Michael ‘One Bullet’ Ansah via a split decision. The reward that night was the much coveted Ghana lightweight title. But Quaye, a.k.a One Time/ No Size, was to lose that accolade five months later to Ansah.

On the third attempt as well, a rather aggressive Michael Ansah scored a surprise knockout, after a moment of loss of concentration on the part of Quaye. The latter had fought well with a strategy of constant swerves after landing two and three punch combinations.

So after what many term an unnecessary or avoidable loss the former lightweight king of Ghana could be heading to the King Beaudoin Stadium Belgium on July 17 for the WBA and IBO international lightweight titles against the undefeated Miki Khatchatryan.

Indications are that Quaye’s camp are having second thoughts about taking the fight. Joy Sports has already sighted posters to the effect that the date is sealed. However if the bout comes off as scheduled and publicized, there will be a few things to consider.

Quaye will be fighting out of his comfort zone of Ghana and one thing that is certain is a partisan set of fans, who will be backing their own – Khatchatryan. Quaye’s mental toughness will have to be at 200% to neutralize and overpower his Belgian opponent.

Away from drawing some of his mental strength from his home atmosphere some unseen hands could work in his favour just as has been seen with other similar big bouts. In 2016, Sheriff Quaye’s compatriot Richard Commey suffered a controversial loss to Russian Dennis Shafikov in Russia following his earlier loss to Robert Easter Jnr. Interestingly his trainer, Carl Lokko, was the same man in the corner for Richard Commey for the Shafikov fight and knows all about these not-so-pleasant-experiences. While such a threat is not scientifically conclusive, the Ghanaian boxer must also guard himself from all possible machinations with a performance that will leave no room for any of such.

Away from all these the undefeated Belgian is also clearly on a mission to write his own story in the division. The exploitation of his orthodox style has led to 12 straight wins with a 50% knockout rate. He won’t come easy.

Some Ghanaian boxers have been criticized for their relative lack of exposure to external crowds and fans. Out of Ghana’s 10 world champions, nine won their titles away from Ghana. Emmanuel Tagoe won his IBO lightweight title in Ghana in December 2016. There are analysts who are of the thought that Ghanaian boxers must sometimes step out of their comfort zone where they have the friends and well-meaning partisan Ghanaian fans always backing them.

There is a counter argument that Floyd Mayweather Jnr for instance stayed in America and made his record achievement of 50 wins and no loss. The difference here is that Mayweather fought before crowds whose majority numbers were not necessarily for him. His bout against Oscar De la Hoya, for instance, where he wore a Mexican hat (sombrero) and a kit in Mexican colours is an example.

The exposure to the atmosphere created by fans, almost all of whom support his opponent, can do a lot to build his psychological toughness.

Till then fingers will remain crossed till a final word is given about the bout.