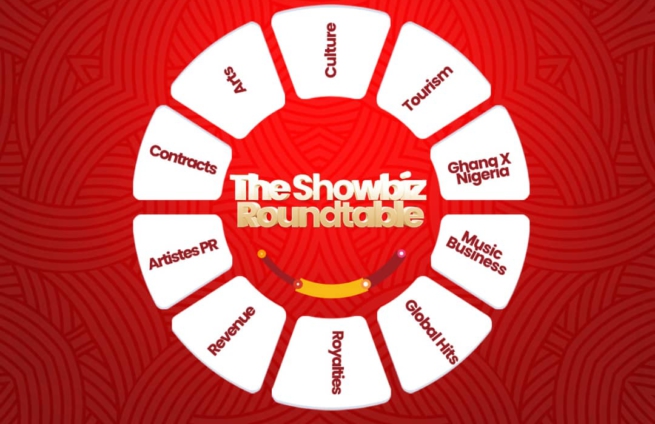 As the days go by, Joy Entertainment displays its preparedness toward its new initiative, the Showbiz Roundtable.

Currently, it has announced its Keynote Speakers for the forum scheduled for October 29.

The thought leadership forum, themed, ‘Music Business and Tourism’, will take place at the Labadi beach Hotel, with an aim of finding the pieces to the puzzle in showbiz for national development.

Head of Production at Joy Entertainment, Philip Nai, announced that, popular playwright, Uncle Ebo Whyte, and President of GHAMRO Rex Omar have been chosen as Keynote Speakers for the forum.

“In the next few days we will announce the rest of the speakers. For now, I am honoured to mention that Uncle Ebo and Uncle Rex will both join us with their wealth of knowledge in the showbiz industry, as keynote speakers”, he mentioned.

Uncle Ebo Whyte is a Ghanaian playwright, and the head of Roverman Production, producers of some of the best stage plays in Ghana. He doubles as an author and motivational speaker. He recently revealed in an interview that his career as a playwright happened only by accident, but has however, gone on to write his name in the history of Ghanaian theatre.

Rex Omar is currently the chairman and president of Ghana Music Rights Organization. He is veteran highlife singer well known for his interests in music royalties. The latter inspired his quest to join GHAMRO with the aim of ensuring that musicians get what they rightfully deserve off their craft.

The addition of Ebo Whyte and Rex Omar to Showbiz Roundtable fuels its mandate of championing the growth of conversations about the industry, to the benefit of all.

Last week, organizers of the forum announced former CEO of 3 Music Networks, Sadiq Abdulai Abu as one of its speakers. The young, opinionated media practitioner said, “the Showbiz Roundtable platform is an important thought leadership platform that affords us the opportunity to not only inform industry but interact, share ideas and insights that are critical to the growth and progress of the creative industry”.

Themed ‘Music Business and Tourism’, the forum aims at dissecting the numerous facets of contracts, artistes PR, revenue, royalties, global hits, tourism, culture, GDP, and many more. It will take place at the Labadi Beach Hotel on October 29, powered by Joy Entertainment, and hosted by seasoned broadcaster, George Quaye.

The forum is an initiative borne out of Showbiz A-Z, which airs on Joy FM every Saturday. Showbiz Roundtable will air on Joy FM, Joy Prime, on all Joy entertainment social media platforms.

DISCLAIMER: The Views, Comments, Opinions, Contributions and Statements made by Readers and Contributors on this platform do not necessarily represent the views or policy of Multimedia Group Limited.
Tags:
Rex Omar
Showbiz A-Z
Showbiz Roundtable
Uncle Ebo Whyte