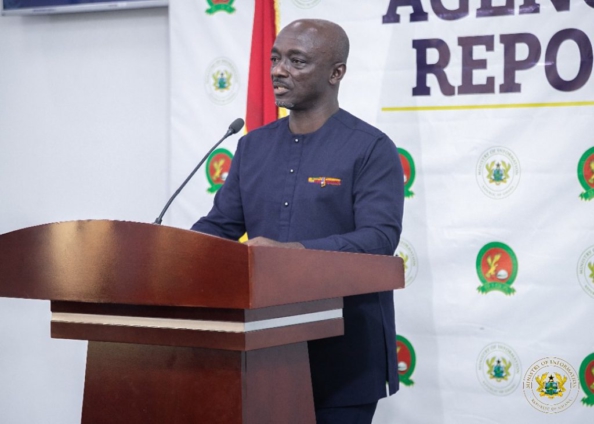 The Director-General of the State Interests and Governance Authority (SIGA), Ambassador Edward Boateng has presented the Joint Report on the 2021 Audit Infractions by SIGA and the Ghana Audit Service to the Chief of Staff, Akosua Frema Osei-Opare at the Authority’s office premises in Accra.

The presentation follows President Akufo-Addo’s meeting of Board Chairpersons and CEOs of Specified Entities on October 3, 2022 where he charged SIGA and the Auditor-General, to investigate the causes of infractions of Specified Entities cited in the 2021 Audit Report and to make recommendations as prescribed by law.

In consultation with the Auditor-General, the Director-General of SIGA constituted a Technical Committee comprising professionals from SIGA, Auditor-General’s office and the Public Enterprises Secretariat to undertake the assignment.

Receiving the report on behalf of the President, the Chief of Staff, Akosua Frema Osei-Opare reiterated the President’s unwavering support for the SOE sector.

“H.E Nana Addo Dankwa Akufo-Addo’s, strong belief in public enterprises is rooted in his vision of putting Ghana in charge of her own destiny by transitioning the country’s economy to a prosperous and self-sustaining one,” she said.

The Director-General of SIGA in his presentation expressed his gratitude to President Akufo-Addo for trusting him to lead his outfit to play such a pivotal role in Ghana’s Development Agenda.

Mr. Boateng also disclosed the intent of his Authority to work with governing bodies of specified entities to develop asset revaluation policies and subsequently implement them to meet best accounting practices.

“I want to share with you SIGA’s plan to collaborate with Specified Entities to embark on an asset revaluation exercise this year”, he said.

On his part, the Minister of Public Enterprises, Joseph Cudjoe instructed all Board members, management, and other key stakeholders to take the report’s findings seriously.

He emphasised: “I entreat you to adhere to the espoused recommendations, when applicable, as we will not hesitate to impose sanctions when necessary.”

Also in attendance were Deputy Auditor-General, Godfred Addison, Mr. Frank Mante of the Public Procurement Authority, Mr. Mac-Effort Adadey of the Controller and Accountant General’s Department, and Dr. Eric Oduro Osae of the Internal Audit Agency, amongst others.

DISCLAIMER: The Views, Comments, Opinions, Contributions and Statements made by Readers and Contributors on this platform do not necessarily represent the views or policy of Multimedia Group Limited.
Tags:
2021 Audit report
Auditor-General
Chief of Staff
SIGA