A commuter train has hit a vehicle at a level crossing north of New York City, killing six people and injuring 15, officials say.

The train, with about 650 passengers on board, hit the Jeep Cherokee near Valhalla – about 20 miles (32km) from New York – on Tuesday evening.

The vehicle's female driver was killed, along with five people on the train, New York Governor Andrew Cuomo said.

The car and front carriage of the train caught fire following the crash.

It was previously reported six train passengers had died but Mr Cuomo and New York officials said that number had been revised down.

The National Transportation Safety Board (NTSB) is on their way to investigate the crash. 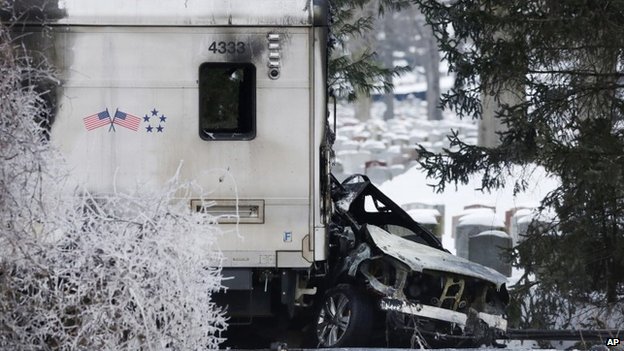 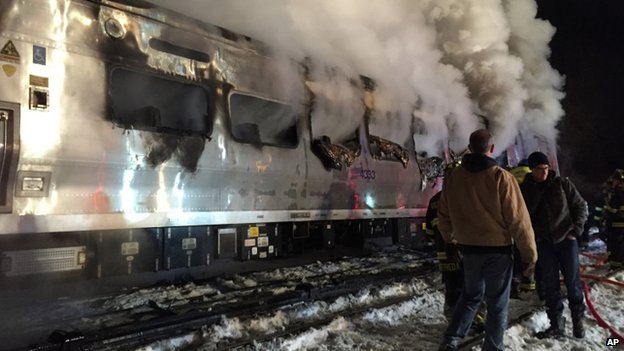 "I am amazed anyone got off that train alive," he said.

The packed commuter train had left Grand Central Station in New York City and was heading to Wassaic in south-east New York State.

The crossing gates at the railroad had come down on top of the vehicle, which had stopped on the tracks, Metro-North Railroad spokesman Aaron Donovan said.

The driver got out to look at the damage, and then got back into the car to drive forward before it was hit by the train. It pushed the vehicle more than 120m (400ft).

It is not yet clear why the vehicle stalled on the tracks.

As a result of the collision, the electrified third rail of the track came through the front carriage of the train.

Passengers had to escape from the rear of the train.

Mr Cuomo, who visited the site of the crash, said he witnessed "a truly ugly and brutal sight".

He added: "When you look at the damage done, it's actually amazing that not more people were hurt."

Passenger Justin Kaback told ABC News: "I was trapped. It was definitely scary – especially when people are walking by on the outside and said 'The train's on fire'."

Another passenger, Jamie Wallace, said passengers had started to panic and shout for a fire extinguisher as flames spread to his carriage. 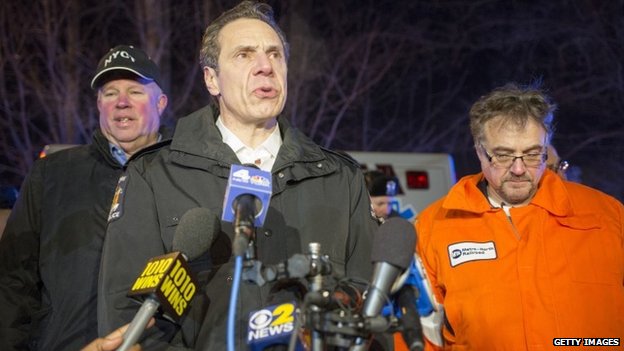 Mr Cuomo called the crash an 'ugly and brutal sight' 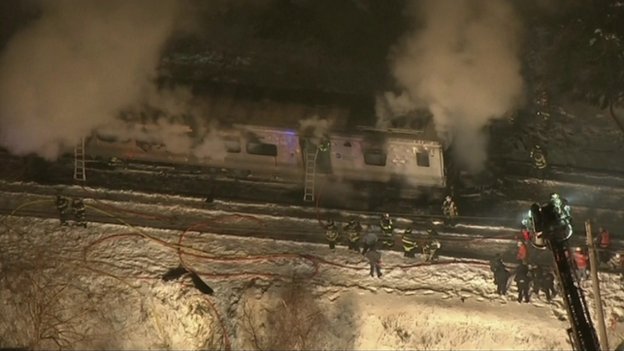 Passenger Neil Rader told NBC that some passengers had managed to flee the train by breaking glass on the doors to get out, adding: "I've never seen anything quite like it."

Hundreds were taken to a local rock climbing gym following the crash.

Parts of the railroad remain closed on Wednesday.

Metro-North is the second-busiest railroad in the US, serving about 280,000 passengers a day in New York and Connecticut.

Last year, the National Transportation Safety Board issued rulings on five accidents that occurred on the railroad in 2013 and 2014, criticising Metro-North while also finding conditions had improved.