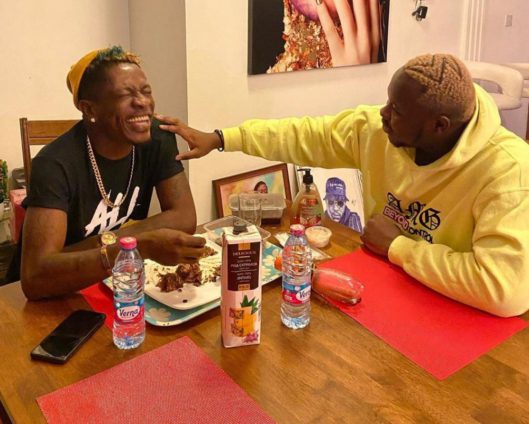 Following the bail granted to the two top musicians who have been in prison for days, social media users cannot get enough.

Shatta Wale was hurled before the court for the publication of false news and causing fear and panic.

The singer known in real life as Charles Nii Armah Mensah turned himself in on October 19 when the police declared him as a wanted individual.

In the case of Medikal, he was arrested for brandishing a weapon on social media.

The rapper born, Samuel Adu Frimpong, was charged for unlawful display of arms and ammunition.

Although the duo pleaded not guilty to their respective charges when they made their first appearances in court, the court refused them bail.

Shatta Wale was remanded into prison custody for one week, while his industry mate, Medikal, was given 5 days in custody.

But when they presented their case again today, the adjudicator granted them a ¢100,000 bail each.

As some tweethearts were delighted with today’s hearings, others felt this marks the beginning of the end of the two musicians’ trial.

I told yall @shattawalegh May walk today and and has been given bail, maybe your prayers worked. 🙏🏾 ONE LUV

Some Twitter users also considered the whooping GH₵100,000 fine as money that can be used to restructure the Ghana Police Service. In view of this, they praised the Inspector General of Police, Dr George Akuffo Dampare, for “his good works’.

Medikal ein next freestyle will be like. “100K on a bail you nor go fit. Me watch tumi tor Parliament House you got to think.” Nkwasia rap 😂😂😂

You legit think Shatta Wale and Medikal’s 100k bail is going straight to the pocket of the IGP and you want to be on government payroll? Masa goan sit down somewhere.

Shatta Wale and Medikal granted bail for 100k each.

The IGP to the whole wiase!!! pic.twitter.com/I4WThXM55W

Shatta Wale and Medikal with this song on replay, after court granted them bail 😭😭😭❤️❤️pic.twitter.com/uEDlrg4wdc

Herh eii, Shatta Wale, Medikal and the Pastor were bail with 100k each.

Charlie this should tell you if you ain’t saving 💰 and you’re fooling wey dem bab u err, u sleep for jail for life 😭😂😂

They said #DoWhatMovesYou, I agree to disagree, ask me why? Shatta Wale did what moves him and he was arrested, same as Medikal

Where will Medikal and Shatta Wale go get that 100K money from ?🤔

As drift nyame hear say dem bail Shatta Wale and Medikal for 100k each, ur man say he no want any bail again herh 😂😂😂😂💔