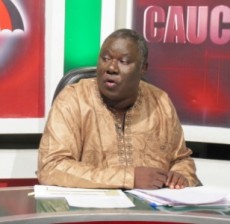 Minister of Roads and Highways Joe Gidisu says the Sofaline interchange project in Kumasi the Ashanti Region has not been abandoned as speculated by some media reportage.

He however admitted there are some bottlenecks that needed to be fixed.

Speaking on Okay Fm Friday, Mr. Gidisu was however hopeful the contractor will meet the set timeline for the project, which he described as one of the largest in West Africa.

He said “the contractor is actively working at the site as the necessary assistance needed for the construction has also been given”.

The Sofoline project hit a snag in 2010, after the Chinese contractors suspended works as a result of financial constraints.

This was aftera Chief Consultant of ABP Consult, and Resident Engineer at the Sofoline Interchange in Kumasi, Kwaku Boampong had announced that, the project was to be handed over to the government, on July 31, 2012.

With the timeline almost near, work on the project has not been completed but the roads minister Joe Gididu has assured that “the government is committed to ensuring that the deadline will be met”.