Some government officials and politicians are involved in illegal mining – Asantehene 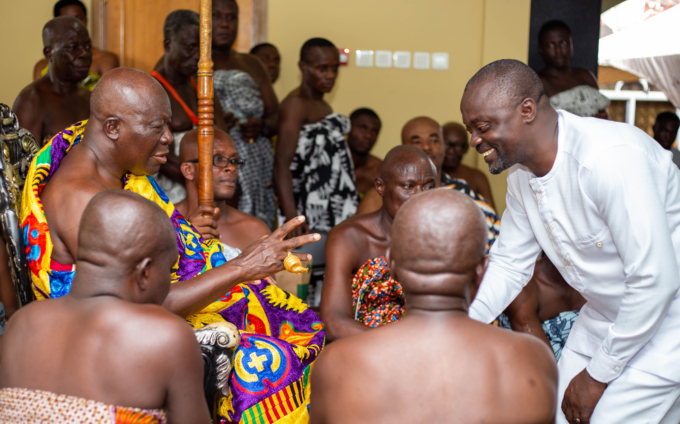 The Asantehene has accused some government officials and politicians of being complicit in the illegal mining menace, popularly known as galamsey.

According to Otumfuo Osei Tutu II, certain politicians and business people not only participate in galamsey but also own earthmoving equipment like excavators that are used to destroy forests and water bodies.

The Asantehene made the revelation when a delegation from The Multimedia Group presented a copy of its latest documentary, ‘Destruction for Gold’ to him at the Manhyia Palace in Kumasi on Wednesday.

The presentation of a copy of the ‘Destruction for Gold’ documentary to the Asantehene at the Manhyia Palace is part of the #NoToGalamsey campaign by JoyNews in the fight against illegal mining.

The Asantehene observed that illegal mining operations have become so complex to the extent that gold can be exported out of the country through the borders without being detected.

“Doesn’t the gold produced from galamsey pass through our airport before being sent abroad?

“Don’t we have equipment that detects them? Why all this noise about galamsey? Are we saying we don’t know those behind galamsey?

“Galamsey operations are very complex with a lot of people involved. We will never succeed in the fight if we approach it lackadaisically,” he said in Twi.

He continued, “There are some collaborators in corridors of power as well as some politicians and some businessmen involved. They own excavators used in these operations. A lot of them.

“We should approach this fight with all the seriousness it deserves. If we are not careful, a time will come that our cocoa beans would be rejected on the world market because of cyanide pollution due to galamsey.”

The Multimedia Group delegation was led by the General Manager of the Kumasi Business Unit, Jim Aglah.

The Asantehene promised to watch the documentary and take necessary action afterwards.

According to him, until the right people behind the illegality are targeted and dealt with, the fight against galamsey would continue to be a mirage.

“I will watch every bit of the documentary done on galamsey. I will be informed of the next action to be taken.

“We are all aware that some Ghanaians have been fronting for Chinese in the galamsey menace.

Meanwhile, Erastus Asare Donkor is happy at the advocacy role played by the Asantehene in the galamsey fight.

“Otumfuo is the embodiment of power and advocacy across the world and so we felt that having done and exposed what is really happening to our river bodies, both in Ashanti region, Western region and Eastern region, across Ghana we felt that he is the custodian of all lands and water bodies.

“So we should show it to him. And if he starts advocacy in that direction, we are sure that we are going to get somewhere.”

DISCLAIMER: The Views, Comments, Opinions, Contributions and Statements made by Readers and Contributors on this platform do not necessarily represent the views or policy of Multimedia Group Limited.
Tags:
Asantehene
Government officials
Illegal mining
Otumfuo Osei Tutu II
Politicians