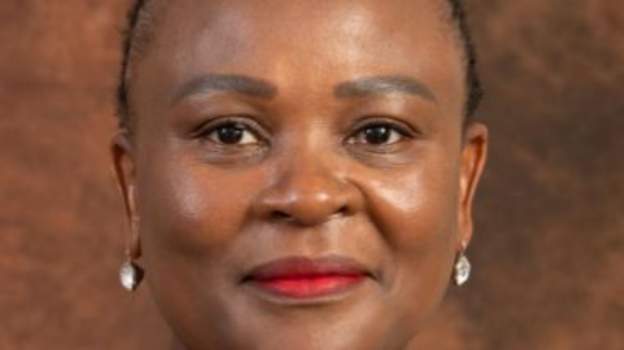 Busisiwe Mkhwebane has not directly responded to her suspension

Advocate Busisiwe Mkhwebane has been dogged by accusations of political bias.

In 2019, the country’s highest court ruled that Ms Mkhwebane lied under oath and had acted in bad faith while carrying out some of her investigations.

A number of her major investigations have in the past been overruled by the courts, raising questions about her fitness to hold office.

Ms Mkhwebane was appointed as the country’s corruption watchdog boss in 2016.

A statement released by Mr Ramaphosa’s spokesperson states that the absence of Busisiwe Mkhwebane from office would not “impede the progress of any investigations that are pending or underway” and that she would be suspended until an impeachment process had been completed by parliament.

The hearings are expected to start next month.

On Wednesday, Ms Mkhwebane said she had received a complaint against President Ramaphosa for allegedly breaching the executive code of ethics.

This was in relation to a robbery that took place at the president’s private farm in which about $4m (£3.2m) was stolen.

People had questioned how so much money in foreign currency in cash had ended up on his property.

Mr Ramaphosa said the money was simply from the proceeds of selling game, and denied any wrongdoing.