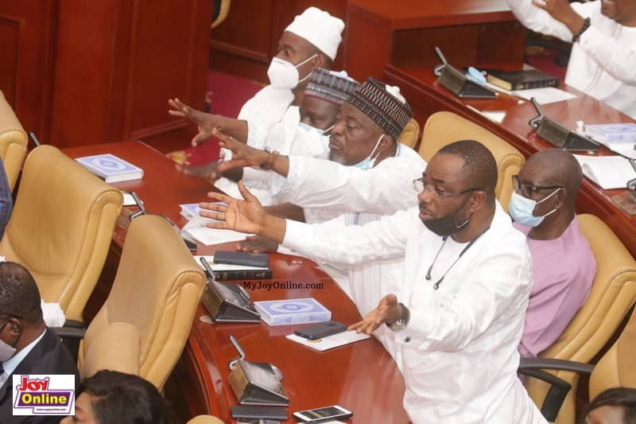 The Minority in Parliament is displeased with 2nd Deputy Speaker, Andrew Asiamah Amoako’s decision to defer a voting process to determine if Health Minister, Agyeman-Manu, should be relieved of his post.

The vote was called for by Minority Chief Whip in Parliament, Mohammed Muntaka Mubarak due to Mr Agyeman-Manu’s role in the procurement of Sputnik V vaccines through a middle man, Sheikh Ahmed Dalmook Al Maktoum.

On Friday, August 6, the ad-hoc Committee probing the contract between government and Dubai based businessman, presented its report to Parliament.

The report revealed that the Minister breached constitutional provisions requiring prior Parliamentary approval of the contract as well as the Public Procurement Act. Additionally, an amount of GH¢16 million was paid by the government to Sheikh Al Maktoum, but Mr. AgyemanManu claimed he did not know about it, at the time he appeared before the Committee. “To the best of my knowledge, we have not done any payment,” he said.

In spite of its findings, the Committee recommended no sanctions against the Health Minister.

This led Mohammed Muntaka Mubarak, to move a motion seeking an amendment to the Committee’s report to include a vote of censure on Mr Agyeman-Manu, for betraying the trust of the people.

“It is beyond reasonable doubt to say the Minister betrayed the oath of his office and he failed to uphold the Constitution and the laws of our country. Mr Speaker, for me, I must say the Minister must be sanctioned. He must be removed by the President. He does not fit to occupy this office anymore.

“In accordance with order 78 and 83, I want to move an amendment to this motion, a report of the Committee to include that the Minister not having lived up to his oath of office, he is not fit to occupy the office of Minister of State and must therefore be removed from office henceforth.

“This House must pass a vote of censure on the Minister. I so move and we on this side of this House, are calling for a vote of no confidence in this Minister,” he said.

According to JoyNews’ Parliamentary correspondent, Joseph Opoku Gakpo, after a lengthy debate on the issue,which lasted into early morning of Saturday, August 7, the 2nd Deputy Speaker deferred the vote on the report.

“Honourable members, I defer the question. I’m unable to put the question. That is my ruling. The question will be put at an appropriate time,” Andrew Asiamah stated.

The House was subsequently adjourned sine die (until further notice) . A decision that was objected to by the Minority as they chanted to register their displeasure.

Speaking to the media, Minority Leader, Haruna Iddrisu described as disappointing, the decision taken by the 2nd Deputy Speaker.

He held the view that voting was suspended because Mr. Andrew Asiamah noticed that the Minority had a larger representation at the time.

“Ladies and gentlemen, my disappointment this evening is that , I don’t want to believe the Speaker deferred the vote because he could not see the presence of his perceived or imaginary Majority.

“Voting must be done by members present and we expected that at least, the Committee’s report could have been adopted but probably sensing that we were in the majority at that material time, he had no option than to opt for the easy way out,” he claimed.

However, Majority Leader, Osei Kyei-Mensah-Bonsu intimated that the 2nd Deputy Speaker had to suspend voting on the issue because of what the House was degenerating into.

“I thought the Speaker was going to put the question but given what the House was degenerating into, in his own wisdom he said he was putting the decision on ice to allow for sanity to prevail. It means that upon resumption, that is when the question will be put on the matter,” he said.

“Speaking for myself and for the majority, I thought the Speaker should have put out the question.”

He, however, quickly added that “once the Speaker makes a ruling, you can’t question that.”

In response to the suggestion by Mr Muntaka for an amendment of the Committee’s report, Mr Osei Kyei-Mensah-Bonsu stated that the procedure used by the legislator was unorthodox.

“The rules of procedure, the standing orders have no room for such on the spare of the moment decision, because this is a matter dealing with a Member of Parliament that you want to propose an action to be done to.

“It should come by a substantive motion which will be submitted to the Speaker just as this one was originally admitted by the Speaker for it to be tabled,” he explained.