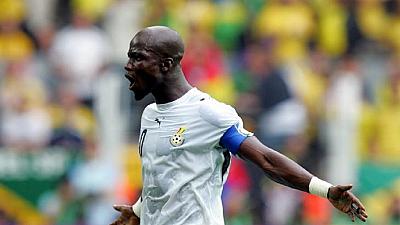 Ayew made his Ghana debut during the tenure of the former Juventus midfielder as skipper, and played under two more captains before assuming the role in 2019.

He pointed to Appiah’s charisma and the love he earned from Ghanaians as the qualities that allowed him to effectively play his role as captain.

“I think he is someone who had the charisma, the love of Ghana and was also marvelous on the field. This allowed him to control everything that was happening in the squad”.

Ayew also described ‘Tornado’ as a natural leader and said he picked pointers when they played together.

The first time I came into the Black Stars he was the leader and I really watched him and took a lot from him because he had that thing [leadership qualities] he did not learn, it’s a gift by God. That’s why he was able to achieve all that he achieved”

Stephen Appiah led Ghana to her maiden world cup in 2006 in Germany and also featured in the 2010 tournament in South Africa.