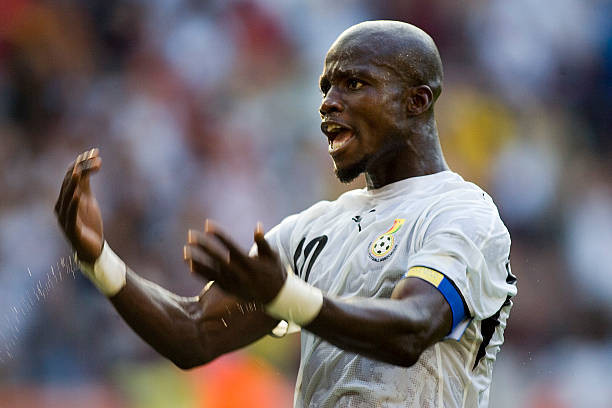 “Stephen Appiah was top class as a leader,” Andre noted in an interview on the Super Morning Show on Monday.

Appiah captained the Black Stars between 2004 and 2010. He led Ghana to qualify for its maiden appearance at a FIFA World Cup in Germany in 2006 and repeated the feat in 2010, a tournament Ghana reached the quarter-final, missing out on a semifinal ticket via penalty lottery.

Under his leadership, Ghana won the admiration of even neutrals and became the royalty of African football, placing 14th in the FIFA rankings in 2008.

Andre Ayew, who was voted Ghana’s footballer of the year under review, revealed the former Juventus and Fernabache man exhibited leadership qualities during his tenure which were unmatched, the reason he was successful.

“I was watching him a lot, spying him and I really took a lot from him…he knew how to deal with players, he knew how to motivate players,” he continued.

Appiah is regarded as one of the most technically gifted players of his generation. Ayew said he accompanied his footballing abilities with a charm that inspired others.

“He was someone who had the charisma and the love for the Ghanaians. On the pitch, he was marvelous but he had those two things and that gave him the power to be able to control everything that was happening in the squad,” he continued.

Andre Ayew played under Jonathan Mensah and Asamoah Gyan during their active days with the 2010 and 2015 AFCON finalists.

He spoke of John Mensah as a man who spoke more on the pitch with his performance and less of it.

“John Mensah also was a different leader,” he began “he didn’t speak much, he was always calm in his corner but he spoke on the pitch. His performance on the pitch will make you understand what he’s telling you and that was his style.

“He wasn’t a big talker, he was always calm and he had the respect from everyone but mainly because he used to perform on the pitch. His pitch play was magnificent.

On Asamoah Gyan, Andre’s predecessor, his friendly nature stood tall and his assessment of Ghana’s all time leading goalscorer style of leadership.

“Baby jet, on the other hand, was more jovial, more into the laughter side of ways. He had the ability to be able to interact with any player at any time due to the way he comported himself which is different from the two,” he said.

Ayew made his Black Stars debut in 2007. He succeeded Asamoah Gyan as captain of the national team in May 2019 after deputising for six years.

DISCLAIMER: The Views, Comments, Opinions, Contributions and Statements made by Readers and Contributors on this platform do not necessarily represent the views or policy of Multimedia Group Limited.
Tags:
André Dede Ayew
Ghana Football Awards
Stephen Appiah
Super Morning Show