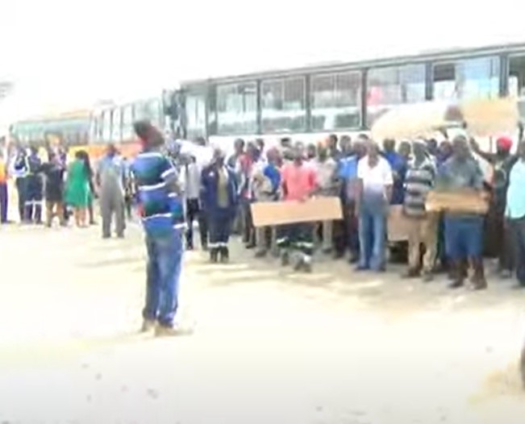 Junior and senior staff of the Metro Mass Transit Company Limited are expected to meet the National Labour Commission (NLC) today, October 14, over their sit-down strike.

The discussion between the workers and the NLC is expected to continue until their demands are met.

Secretary to the workers’ union, Anthony Appiah, noted that until the company’s Managing Director is dismissed, their industrial action will not be called off.

He added that the Union has accepted to meet the NLC, hoping for a favourable outcome from their deliberations.

“The demand is that we want to hear from the President on the removal of the Managing Director. Until that, the strike is still on. We don’t know what the Commission is going to tell us, so we will still sit and go and listen to them,” he said.

Workers of the Metro Mass have been on a nationwide strike over unpaid salaries and other challenges they claim to have been enduring over the past five years.

“What is going on is not good. He himself (the manager) has seen that it is not good and has to step down. He should make it a way that the buses should be on the road. Our salaries should be paid each month,” one staff said.

“I have been here for 13 good years now. The company started sinking and sinking. Now we do not have enough buses, we are having less than two hundred buses. The company is not moving,” another staff lamented.

The Communications Manager of Metro Mass Transit, George Krobeah, has explained that the company owes only two months’ salaries (August and September).

He said the action taken by the staff is not in the right direction as the company has its own processes to deal with grievances from workers.

According to him, the strike action is surprising to management as the company has commenced payment of August salaries.

“The whole action is coming as a surprise to Management because as a company, we have our own way of doing things. Individuals cannot just wake up and declare strike action just because they feel they have concerns. The company has laid down procedures for undertaking some of these actions.

“The Company currently is owing only two months’ salaries. We have started paying August salaries and by Friday all things being equal, we will finish with payroll on August salary and that means we are owing only arrears of one month’s salary,” he stated.