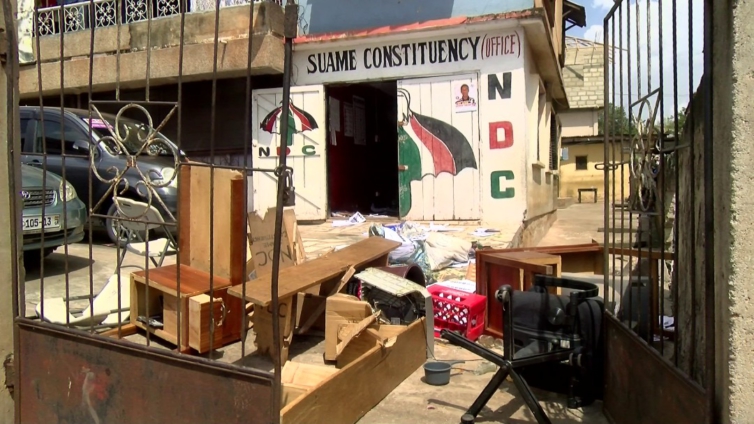 Some members of the National Democratic Congress in the Suame Constituency of Ashanti Region have vandalized the party office over alleged ghost names in the constituency album.

The aggrieved members claim their names have been expunged from the album and replaced with unknown persons.

Suraj Mohammed is among those whose names are missing from the album.

Names of members in about 21 branches of the party are alleged to have been replaced, disenfranchising them from the constituency election slated for Saturday October 22.

They have petitioned regional executives, but their grievance has not been addressed.

Results of their action is visible at the entrance of the party office.

Party documents, including forms of some aspirants with their embossed pictures, have been thrown out.

Suraj says their action is to send a signal to both regional and national executives for immediate solution.

Other victims from different branches of the party within the constituency poured out their displeasure against party executives for failing to solve the challenge.

A member of the election committee at Suame, Musah Mohammed, has confirmed receipt of a petition from the victims from the 21 branches.

According to him, party executives have taken steps to address the challenge, but the victims are not patient.

DISCLAIMER: The Views, Comments, Opinions, Contributions and Statements made by Readers and Contributors on this platform do not necessarily represent the views or policy of Multimedia Group Limited.
Tags:
NDC
Suame constituency
Vandalism
Voters register