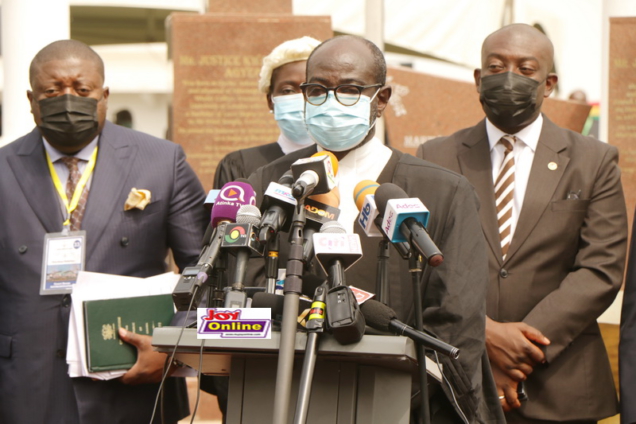 A member of president Akufo-Addo’s legal counsel in the 2020 election petition case, says the Supreme Court has been lenient on the petitioner, John Dramani Mahama.

Frank Davis opined that the Justices of the apex court were gracious in giving the lawyers of Mahama another chance to file their witness statements.

“It comes as a surprise that the petitioners were given an opportunity once more to file the statements after failing to do so as earlier instructed.”

“The court has been gracious and very lenient to the petitioner because he has been given another opportunity to correct the wrong”.

His comment comes after the Supreme Court ordered Mr Mahama to file his witness statement by close of Wednesday, January 27.

This was after Mahama failed to comply with an earlier directive to file his witness statement before the fourth hearing on Tuesday.

According to the Counsel for the Petitioner, Tony Lithur they had opted not to file witness statements as ordered by the court due to pending applications earlier filed, in which they prayed the apex court to review the dismissal of their request to serve the EC some 12 interrogatories.

But the 7-member panel of judges hearing the petition cautioned Mr Mahama to file his witness statements or risk having the election petition dismissed.

However, Mr Davis believes that the action by Mahama’s legal team is a tactic being employed to delay the hearing of the substantive matter.

“It is not for flying of literature and dull English devoid of any legal merit. I want to advise my colleagues from the other side that if it hasn’t been broken, don’t attempt to fix it,” he stated.

Nonetheless, Mr Davies indicated that Akufo-Addo’s legal team are ready to face the petitioners during the next adjournment.

The case has since been adjourned to January 28.

DISCLAIMER: The Views, Comments, Opinions, Contributions and Statements made by Readers and Contributors on this platform do not necessarily represent the views or policy of Multimedia Group Limited.
Tags:
Election Petition 2020
Frank Davies
Supreme Court