A win for Isaac Dogboe (18-0, 12 KOs) on Saturday would be Ghana's eighth world title after several failed attempts in recent years. He faces Jessie Magdaleno (25-0, 18 KOs) for a WBO super bantamweight title in the USA this weekend.

The Ghanaian goes by the name ‘Royal Storm’ and he'd need every bit of guile he can muster to beat the Mexican-American.

Magdaleno will be defending his title, which he won with a unanimous decision over four-weight world champion Nonito Donaire on Nov. 5, 2016.

He has defended his belt once, a second-round stoppage over Adeilson Dos Santos last April. When Magdaleno steps into the ring against Dogboe, it will have been 371 days since the Dos Santos fight.

We look at three ways the 23 year-old Ghanaian can win this duel.

Southpaws are a nightmare in combat sport; Magdaleno is a southpaw.

This stance is where a boxer has his right hand and right foot forward, leading with right jabs and following with a left cross. And that's the normal stance for left-handed boxers.

Southpaws hold an advantage over orthodox (right-handed) fighters because everything they do comes from the opposite side that a 'normal' right-handed fighter is used to.

Dogboe is right handed and, naturally, uses the orthodox stance.

The conventional wisdom is that an orthodox fighter must circle to his left on the outside of his jab to neutralise a southpaw's killer left hand. That is true, but the worst thing Dogboe can do is to be predictable – whether circling to his left or right.

For a southpaw, the 26-year old Magdaleno has really got a cultured right hand. If Dogboe keeps circling to his left, he could get caught with a surprise right hook.

It is not a bad thing to be aggressive in the sport of boxing but it must be controlled.

Failure to do this, and it becomes a weakness. Magdaleno is a pressure fighter; he fights mostly on the front foot, and utilizes two-three punch combinations, which usually ends with the hook to the body or right.

These combinations leave him open to counters. It will however require speed in thought and execution for Dogboe to exploit those opportunites. Aggressive fighters throw punches in high volumes, with a vast majority missing the scoring mark.

Though the bulk of the flurry may miss the mark, this style has the tendency to slow down opponents. It also paints a picture of a busy fighter, which sometimes – psychologically – sways judges into awarding undeserving points.

It is important Dogboe punches while Magdaleno punches; the Ghanaian must not cover or block.

The only way to stop Magdaleno (pictured below) from punching is for Dogboe to punch. This was evident in the final rounds of Nonito Donaire vs Magdaleno. 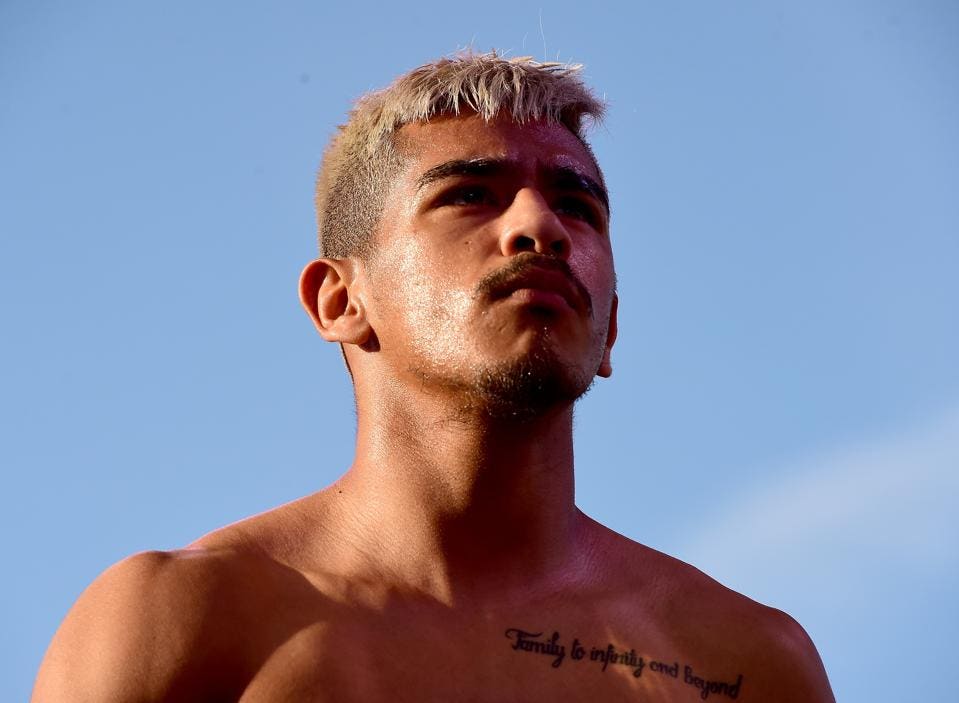 This was Magdaleno's most difficult bout to date, and he began to retreat when the Filipino, sensing he was behind on the score cards, started going toe-to-toe with the Mexican. Donaire succeeded in opening a cut over the Mexican’s eye, forcing him to draw back.

Alternatively, Dogboe should ‘fight on the inside’. Inside fighting is when fighters stand within striking range of any punch to any part of the body. Opponents literally lean on each other and look for close shots.

Take your own ref, Isaac

The statement encapsulates the mindset of Africa’s greatest boxer Azumah Nelson during his many fights outside Ghana.

It essentially means you must beat your opponent convincingly and leave no doubt in the minds of the judges or the audience. Dogboe goes into the fight as the challenger to Magdaleno’s bantamweight title.

And history has shown that in most cases, where fights have been close, the champions have been handed the decisions. Mexicans are a dominant part of the heart and soul of the boxing industry. The numbers show that 200 world champions have come from Mexico or have been of Mexican descent.

With a population of about 124 million people (2017 estimate), the country’s love for the sport is unparalleled.

It underpins why four of the top ten highest-grossing pay per view fights in history involved Mexican/Mexican-American fighters, as shown below.

Simply put, the commercial dynamics of the sport means that any close decision likely goes in favour of Magdaleno. In short, it will make commercial sense to hand a decision to Magdaleno by virtue of his Mexican connection.

Dogboe is unlikely (not impossible) to win on the scorecards. If he’s to woo the judges to hand him favourable numbers he must dazzle the fans, impress the judges, outthink and outclass his opponent…or simply knock him out.

The last option is a one-way ticket to leaving the US with the world title.

The fight will air live on ESPN in the United States beginning at 7 pm ET Saturday (11 pm Ghana time). No local TV station has acquired rights for the fight. The best option will be to watch via internet streams.
Joy Sports Twitter (@JoySportsGH) will be providing updates of the bout.
Meanwhile, Joy Sports look at five reasons why this fight is the most important for Ghana in the last 30 years.