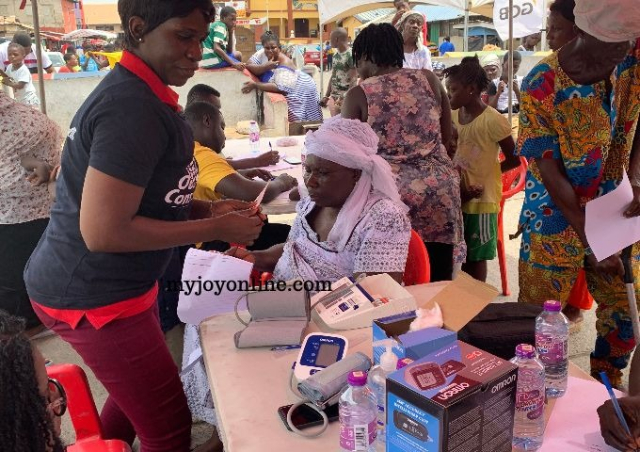 A communications director of a health outreach consortium has emphasised the need for citizens to partake in more health screening exercises.

Naa Teifio of the Global Outreach Consortium says they are heavily involved in creating awareness for the aged especially who are more prone to medical risks due to ageing to partake in more health screening.

“The aged do not go to the hospital for a regular check-up to know their status with regards to blood pressure, sometimes hepatitis B and other medical conditions,” she told journalists at one of their health screening exercise over the weekend in Accra.

She added, “Most of them say they do not have health insurance, are too weak to go or they simply don’t have the money. Thankfully, with conditions like Hepatitis B, our doctors are able to treat it.

According to her, their consortium is able to undertake surgeries for people who are diagnosed with such a condition.

“We have cases of some of the fishermen undergoing surgeries for hernia at the Korle-bu Teaching Hospital. We also undertake Gynaelogical, orthopaedic and neurosurgeries for people in the communities they visit,” she said.

She said due to their fishing activities, they have recorded lots of hernia cases by the men.

“We have been coming here from time to time to educate them on how to live a healthy life to avoid the hernia condition,” she said.

Global Outreach Consortium undertook the simultaneous health screening in Jamestown, Bubuashie and Bukom in partnership with the Rebecca Foundation, GCB Bank and the Bannerman Foundation.

“We are not just screening them but we are giving them medications as well. For those who need to do lab test which can be done here, we take care of that. We give referrals to those who need further checks at the hospital.

She said they will need the supports of philanthropists, NGOs and kind members of the public so they are able to spread their reach to many other areas in the capital and to enable them to serve more people.

The Managing Director of GCB Bank, Anselm Ray Sowah, who witnessed the screening, lauded the participation and patronage of the communities in the screening exercise.

He said they are concerned with the health of everyday people like those at Jamestown, Bubuashie and Bukom as part of their CSR.

“It was amazing seeing people trooping in for a check-up. There is so much joy seeing that people are concerned about their health and they have responded to our call for them to come out and check their health status,” Mr Sowah said.

On his part, Nii Lantey Bannerman, the NPP Parliamentary aspirant for Odododiodio in the 2020 elections, said his support for such programmes will not be a nine-day wonder.

He said he has always pursued such philanthropic duties prior to 2016 defeat and hopes to increase his support for such outreach if whenever he is called upon.

The doctors and specialists led by Dr Naomi Ama Apea, screened for Hepatitis B, haemoglobin level, malaria, blood pressure, sugar levels, among others.

Dr Apea on her part said the partnership with GCB has been beneficial to the communities.

Participants were also advised to engage in healthy lifestyles to improve their general well- being.