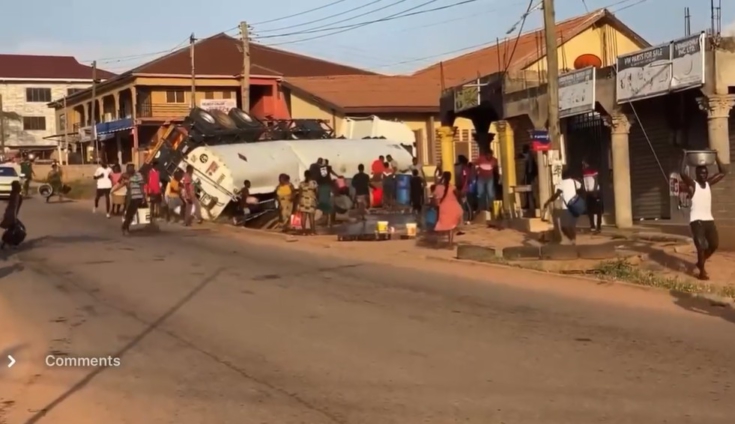 Some residents of Kaase in the Ashanti Region threw caution to the wind as they siphoned diesel from a tanker that toppled over on Sunday.

Many stored several drums of diesel in their homes before the Police and Fire Service personnel could get to the scene.

The long vehicle carrying fifty-four thousand litres of diesel fell off as it negotiated a curve leading to the Bulk Oil Storage and Transport Company premises.

“The main road had been blocked and the only alternative was this rough road and he didn’t get it right so the thing got down,” ADO II Ebenezer Graham explained the cause of the accident.

It took the effort of the Police and Fire Service personnel to control the number of people trooping to the area to siphon fuel to their homes.

David fixes sliding doors nearby. He has a bucket in hand. With the foam in it, he soaks the diesel and squeezes the content into the bucket.

He is not deterred by the presence of the Police in carrying through with the operation.

”I was called that our cocoa is ready for harvesting so I had to rush here. The Police were preventing us but we found our way. Tomorrow, the kids will go to school so I need the money. If things were good, we wouldn’t have risked our lives here.”

“This year, we haven’t seen such accidents so we were wondering why. It mostly fall up there not here, especially in the Christmas season. I have sold three Kufuor gallons full of diesel, 120 cedis each”, he explained.

A few meters away from the scene is an old man believed to be in his late 50s. In front of him is a bucket filled with diesel. He narrates how almost the whole community came to share in the booty.

“Making money is very difficult so we had to take advantage of the opportunity to make some money. We know it can only light a flame if we used aluminium to syphon the fuel. So we soaked the fuel with foam”, he said.

Some of them had already sold the diesel to dealers.

“We sold a gallon for 40 cedis instead of 50. I have sold at least 3 gallons,” Jude is one of the individuals.
The Ghana National Fire Service expressed disappointment at the behaviour of the public.

DISCLAIMER: The Views, Comments, Opinions, Contributions and Statements made by Readers and Contributors on this platform do not necessarily represent the views or policy of Multimedia Group Limited.
Tags:
Kaase
Tanker accident