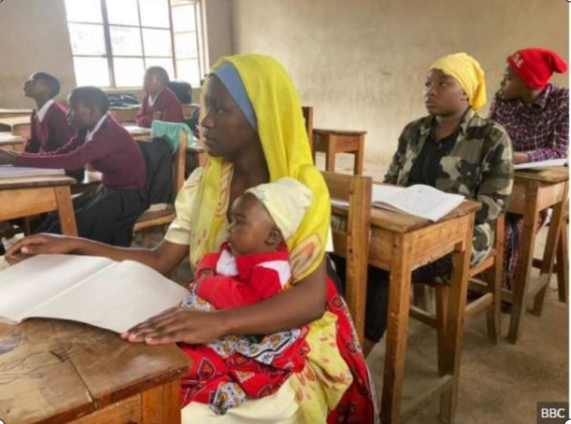 A Tanzanian schoolgirl has had to return to the classroom with her baby after a new order reversed a ban on pregnant schoolgirls.

Esnath Gideon told BBC Swahili that she lacked a caregiver and the teachers were gracious enough to allow her into the class with her four-month-old baby.

The 19-year-old had lost hope about completing her education when she got pregnant while in form four.

She is now happy the government has allowed young mothers to resume studies and wants to study hard and become a lawyer.

“With the baby in class, my concentration is affected but I’m mostly able to listen. The challenge is when the baby needs a nappy change as there are no places in school where I can change the baby,” she says.

Ms Gideon lives with her grandmother who sells samosas in the market and is happy her granddaughter is able to study.

The grandmother was disappointed when Ms Gideon got pregnant as that meant she would stop studying.

More than 1,500 pregnant girls were expelled from schools in Mbeya district.

So far, 240 of them have returned and a special system has been put in place to allow them to cover the syllabus in a shorter time.