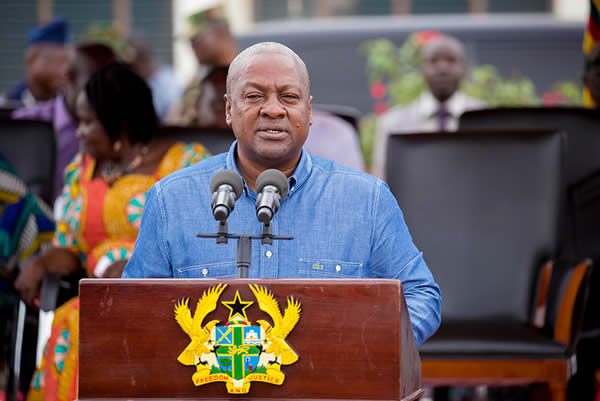 President John Dramani Mahama said on Thursday that he has given executive approval for the passage of the Technical University Bill.

The Bill would be laid before Parliament for passage as soon as the House re-convenes in May, President Mahama said when he inaugurated a multi-faceted lecture block constructed at the cost of â‚µ7.3 million at the Sunyani Polytechnic.

The facility was funded by the Ghana Education Trust Fund, and would serve as integral provision towards the conversion of the Polytechnic into a Technical University.

President Mahama explained his government had undertaken massive retooling and upgrading of infrastructure to enhance teaching, research and learning in the six Polytechnics expected to be converted into technical universities by September this year.

He said re-assessment was being done at the Cape Coast and Tamale Polytechnics, and that based on the Assessment Committee’s report, a final decision would be taken on the two institutions for their conversion or otherwise.

President Mahama said because the Bolgatanga and Wa Polytechnics could not meet the eligibility criteria set up by the technical committee and the panel of experts, the government would undertake a fast track upgrading of infrastructure for their conversion when they meet the criteria.

He added that faculty upgrade would also be done at the two Polytechnics through the offering of scholarships so that lecturers could improve on their qualifications as part of the eligibility criteria for the conversion into technical universities.

President Mahama expressed appreciation to policymakers, academia, students and relevant stakeholders for the immense work done on the transformation process to convert the nation’s Polytechnics to technical universities.

The Vice Rector of the Sunyani Polytechnic, Dr Kwadwo Adinkra Appiah said the Polytechnic was in urgent need of a large capacity-seater bus for industrial and field work and appealed to the President to assist in that regard.

He appealed for the construction of a pedestrian footbridge across the Sunyani-Kumasi highway at the frontage of the Polytechnic to curb the incidence of pedestrian knockdowns.

Dr Appiah commended President Mahama for the early completion of the block, saying it would reduce pressure on the existing few lecture halls and create an opportunity for more students to gain admission into the Polytechnic.