Ten dead in a road accident at Savelugu - MyJoyOnline.com

Ten dead in a road accident at Savelugu 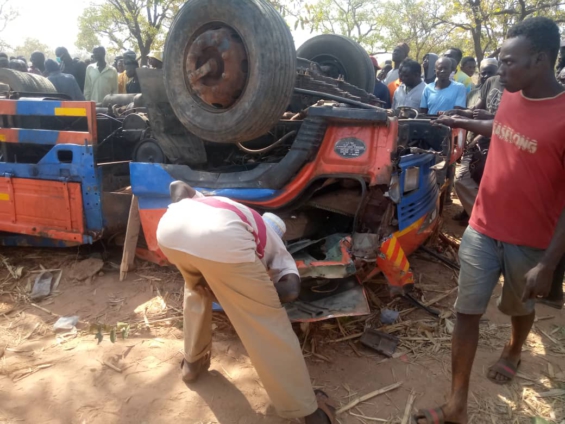 At least ten people have been confirmed dead after the Kia Rhino truck they were traveling on was involved in an accident at Savelugu in the northern region on Sunday.

The truck, the Police said, was carrying over 33 mourners who were returning from a funeral when the fatal accident occurred on the Savelugu-Zuarungu road.

According to the Northern Regional Crime Officer, Superintendent Bernard Baba Ananga, the accident happened when the driver of the Kia Rhino truck, in an attempt to avoid knocking down a cyclist lost control and the vehicle somersaulted off the road into the bush.

“About six people died on the spot. Later, four people died when they were taken to Savelugu Hospital for treatment. Others were sent to the Tamale Teaching Hospital for further treatment. The information we gathered was that the driver indicated he was trying to avoid knocking a cyclist on the road who was on phone whilst riding a bicycle.

All of a sudden, the bicycle rider crossed his lane and in an attempt to avoid knocking him, he lost control and the vehicle somersaulted and finally landed in the bush. Those who died on the spot were taken away before the Police arrived at the scene,” he told JoyNews.

According to the Police, the driver is on admission at the Savelugu Municipal Hospital.