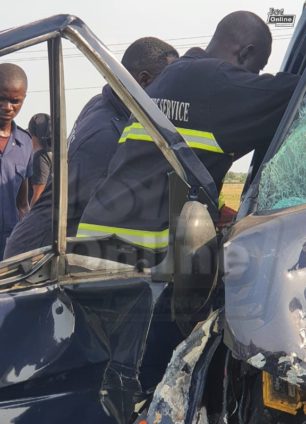 Three persons have been confirmed dead in an accident at Sege in the Ada West District of the Greater Accra Region on Saturday.

Seven others are said to have sustained various degrees of injuries in the crash involving a Ford bus, a Sprinter, and a tipper truck.

According to an eyewitness, the accident occurred when the sprinter driver made an overtaking, thereby crashing into the oncoming tipper truck and the ford.

The drivers of the ford and sprinter vehicle, including a passenger, died on the spot while seven others got seriously injured while the tipper truck drove off.

The Ghana National Fire Service officers rushed to the scene to help remove the vehicles at the scene to allow free flow of the traffic.

The injured people have been sent to the nearby hospital for treatment.