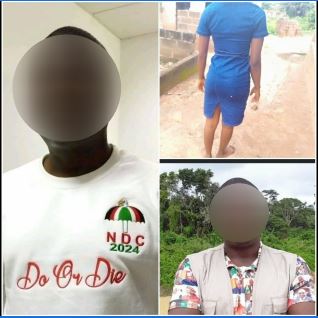 The Central Regional Police Command is on a chase for the region’s Communications Officer of the National Democratic Congress (NDC).

Kwasi Dawood is being sought after for alleged rape, incest, abortion and assault of his biological daughter, whose name we have withheld.

Mr Dawood, according to adomonline.com sources within the C/R Police Command, has been reported by his daughter for having sex with her multiple times, leading to a pregnancy.

Upon realising that he had impregnated his daughter, Mr Dawood allegedly contacted a quack doctor named, Dr Arthur Mensah to perform an abortion on the victim.

The suspect is said to be currently on the run, but his accomplice in the abortion accusation is in police custody, assisting with investigations into the matter.

According to a petition submitted by the victim’s mother, Mavis Ayitey, to the Central Regional Police Command, the suspect has allegedly been engaged in the act since the girl was 15.

“The father, Mr Kwesi Dawood, has been forcibly having sexual affair with the daughter since the age of fifteen years (Incest) and even had an abortion for her and warned her not to inform anyone, else he will make her life miserable,” the petition read in part.

According to details contained in the same petition, the victim, who could not bear the pain of the father’s actions anymore, on the 24th of August, 2021, confided in her school’s Housemaster.

The Housemaster is said to have confronted the suspect on phone and he admitted to the offence.

The school official then invited the girl’s grandmother, who stayed at Swedru, to the school and informed her about the victim’s ordeal.

Not happy with the girl’s confession, on the night of 27th August 2021, after the girl had come home for vacation, the suspect met her by the roadside while he was in a taxi and decided to beat her up.

The suspect is alleged to have ruthlessly beat up the little girl, kicking her in the abdomen before forcibly pushing her into the taxi he was occupying.

It took the intervention of onlookers around to rescue the small girl.

Upon hearing about her child’s ordeal, the girl’s mother then lodged a complaint with the Central Agona Swedru District DOVVSU office on August 31, 2021.

Upon interrogation, the victim was given a medical form to the Swedru Government Hospital for medical examination.

The medical officer’s report, which is currently available to this portal, said, among other things, that “on vaginal examination, the hymen was broken”.

Suspect on the run

According to the police, the suspect was invited to the offices of DOVVSU through a mobile phone call, but he has refused to report.

The case has since been moved from the Swedru Police station to the Central Regional Police Command.

The suspect is currently being sought by the police.

Our sources within the NDC have confirmed that the suspect has been suspended indefinitely, pending a police investigation into the matter.

To give the suspect a fair hearing on the matter, adomonline.com has been trying to reach him since the story got to us, but his phone has been off.

Editor’s note: This is a developing story, and we shall keep listeners informed every step of the way.