The designer behind Gyakie’s outfit at Global Citizen Festival 2022 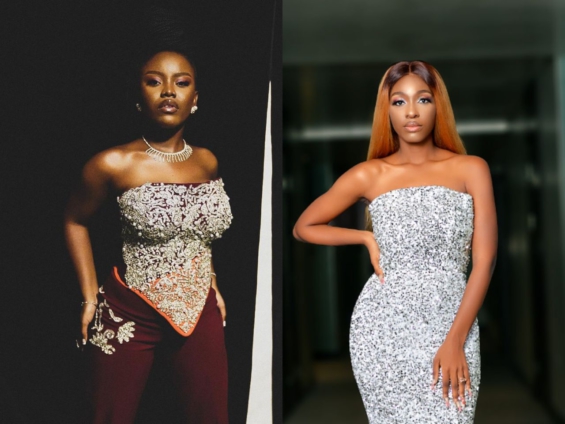 Accra just hosted the Global Citizen Festival 2022, while another one took place in New York City the same night. It wasn’t an average Saturday evening, as stars from around the world and within Ghana graced Black Star Square.

With powerhouses like Usher, SZA, and Stormzy, headlining the show, Ghana’s very own Gyakie also performed for thousands of fans.

It was a big night for Gyakie, Ghana, and the whole continent, as countries and organizations announced $440 million to end extreme poverty in Africa. With United Nations, European, and North American countries pledging millions of dollars to fight poverty and disease in Africa, the Global Citizen Festival was a big celebration, and Gyakie chose just the right outfit to perform in.

She turned to a local designer, Emmanuella Amankwah who runs the brand, Ellanore, to create her outfit.

Based in Accra, Amankwah is a couturier at heart, designing Avante-Garde outfits with classic feminine elements and sparkling embellishments. Her designs emphasize curves and bring out that hidden feminine sensuality.

Corsetry is a signature element at Ellanore, which she incorporated in Gyakie’s outfit for the big night.

It was a two-piece ensemble with a strapless corset top, heavily embellished with stone detailing, and paired with matching wide-leg pants with similar embroidery accents on the hem.

The outfit was almost all maroon, with bright orange draping on the top barely visible behind the sparkle of the embellishment.

When asked about the inspiration behind the outfit, Amankwah said, “Powerful women have always inspired me and when I think of powerful women, I always picture dark colours, because it takes a lot of confidence to pull off such strong shades.”

She also explained her direction of going with a top and pants route instead of a dress, which are generally Ellanore staples, “I thought of doing pants for Gyakie because I wanted something bold yet functional, as she was going to be performing on the stage. I wanted her to look great but also feel comfortable moving around on the stage and owning it, which is exactly what she did with that amazing performance.”

Designing an outfit for one of Ghana’s emerging stars and that too for an event as big as the Global Citizen Festival is a tall order. Emmanuella put a lot of work and time into making the exclusive outfit. It took her over 48 hours to construct the outfit, which makes sense, given the intricate embroidery that graced the front top.

Gyakie styled the outfit gracefully with some elegant silver jewelry and hair tied up. Her modern yet classy style sets her apart from other female artists in the industry.

She knows how to maintain a lady-like elegance even with outright sultry looks. It is safe to say that Ellanore’s creation fit the brief perfectly, combining a bold cut with traditional embellishments that sparkled all over the stage.

DISCLAIMER: The Views, Comments, Opinions, Contributions and Statements made by Readers and Contributors on this platform do not necessarily represent the views or policy of Multimedia Group Limited.
Tags:
Ellanore
Global Citizen Festival 2022
Gyakie