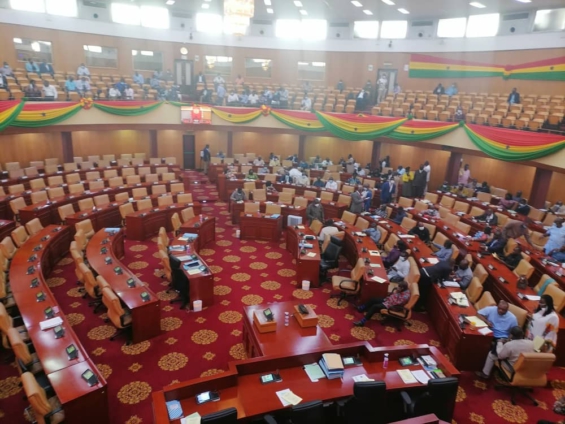 The 30th of November 2021 will go down in the annals of Ghana’s history as the day of Ghana’s Great Betrayal by an equally divided Parliament of 275 Members with 137 members from the New Patriotic Party (NPP), 137 members from the National Democratic Congress (NDC), and an independent member in their refusal or failure to perform their constitutional duties in holding the executive arm of Government to account without fear or favour, affection, or ill will.

It is also a great day of shame on which Ghana’s Minority in Parliament once again betrayed We the People by abdicating its constitutional responsibility to defend the decision of Parliament on 26th November 2021 rejecting the draconian 2022 Budget Statement and Economic policy presented by the Minister of Finance (on behalf of a democratic-autocratic Government) without any iota of prior consultation with affected stakeholders to Parliament on 17th November 2021.

This is a Minister of Finance who owes his appointment to a bareface sell out of the people’s wishes for his proper vetting for approval by this same Minority in Parliament – the Kabuki dance goes on.

The facts and evidence gathered from open-source intelligence are that on the morning of 30th November 2021 the so-called Majority and the so-called Minority caucuses in Parliament (hereinafter referred to as the Majority and the Minority) met with the Minister of Finance in attendance to negotiate a way forward after the rejection of the 2022 Budget on 26th November 2021 under the Speakership of the Rt Hon. Alban Bagbin.

The two caucuses could not reach a consensus “…. because the Majority together with the Finance Minister refused to review the proposed 1.75% e-levy” amongst other disagreements. Ghana Web captured the reasons for the Minority’s position as narrated by the Minority Leader when it quoted him as stating that:

“Indeed, the vexed issues, for which there was a stalemate, for which we could not discuss further, was the matter of E-levy. Our original position was that, no, no, no, no, to e-levy. They explained to us the difficulties and circumstances of the economy and the fact that they needed some additional revenue for purposes of consolidation, fiscal consolidation. We referred to them, that the brilliant economists at ISSER, had suggested to them that review it downwards; therefore, we said if you could go to 0.5 to 1%, we could accommodate you, for the good of the Ghanaian people. They said it was their budget and they were not prepared to review the e-levy.

“So, the Ghanaian people, we then decided that they must stand alone in it. Because we believe sincerely, that it’s punitive as Professor Quartey said, and it doesn’t serve a good tax instrument because it’s regressive…. So, if you didn’t see the Minority cooperating, these were the very reasons we were unable to support them. So, we’re determined to support them to redeem the economy. Because we want to inherit a healthy economy under President Mahama, in the very foreseeable future of 2025. But the difficulty was on those matters.” (Emphasis supplied).

Analytically and commonsensically, the nature of the cooperation and support proposed by the Majority and the Minister of Finance at the consensus building meeting was for the participation of the Minority in the recession and approval of the 2022 Budget on 30th November 2021.

This was to enable the Majority to “… stand alone in it” in accordance with the words of the Minority Leader. The Minority consequently indirectly cooperated and supported the Majority caucus to attempt an unconstitutional rescission of the Parliamentary rejection of the 2022 Budget.

This contention is validated by the fact that the Minority knew at the time of absenting itself from the formal parliamentary sitting on 30th November 2021 that the Majority caucus could not carry through its proposed unconstitutional attempt at the rescission of the rejected 2022 Budget on 26th November 2021 if all the 137 members on the Minority side attended the parliamentary sitting and voted against the decision to rescind the rejection of the 2022 Budget.

There would have been a tie in the vote for rescinding the rejection of the 2022 Budget even if the independent member voted with the Majority and the motion for recession would have been lost by the Majority of 137 members minus the Speaker who could not have voted or be counted as voting.

Without the approval of the motion for the vote of rescission, the Majority caucus could not have further gone ahead to purport to approve the 2022 Budget at the Parliamentary sitting on 30th November 2022. Consequently, the press conference by the Minority on 30th November 2021 disassociating itself from the rescission of the rejection of the 2022 Budget by the Majority naturally smacks of political opportunism, lack of integrity and honour on the part of the Minority.

Ironically, at the same press conference the Minority shamelessly and in an Orwellian Big Brother doublespeak fashion accepted to work with what the Minority termed the unconstitutional rescission of the 2022 Budget rejection decision of 26th November 2021 when it laid down how the Minority was going to relate to the Majority on the rescinded and approved 2022 Budget of 30th November 2021 as reported by Joy News in the following words:

“…. He [the Minority Leader] indicated that, based on the conduct of the Majority, his Caucus will resort to the use of headcounts in determining all issues which will come before the House….”

This is the same Minority in Parliament with its National Executive outside Parliament who shamelessly let the people of this country down in March and June 2021 during the approval of Ministers and Deputy Ministers for appointment by the President. The Minority’s betrayal of this nation on 29th March 2021 is what has particularly burdened the country with a Minister of Finance who is supporting a democratic-autocratic President in wreaking havoc on the economic wellbeing of Ghanaians without any guarantee that the public purse may not be looted. And cupid did not even allow the Minority to pretend to maintain its first redemption of that betrayal before the Minority again knowingly facilitated the Majority’s rescission of the prior rejection of the 2022 Budget on 30th November 2021.

The Budget months of November/December used to be harvest season for Members of Parliament in the 5th Parliament of the Fourth Republic when I was then the Minister of the Interior (with additional responsibility for Security and Intelligence), and later an Attorney-General and Minister of Justice. I believe that the parliamentary sitting allowances for committee meetings continue to be legitimately paid for the processes leading to the consideration and appropriation of the budget for the next year.

But the 5th Parliament Budget season was also the time for Ministries and Departments to facilitate the parliamentary approval of their budgets at the committee stages with unaccountable incentives. Professor Stephen Adei and I spoke about how the process worked then. Hon. Alban Bagbin, MP, as he then was, validated the position of Professor Adei and I later.

Whatever the position may be under the 8th Parliament, the legitimate parliamentary budgetary committee allowances help Members of Parliament to meet some of their obligations to constituents during the Christmas season. If one boycotts budget committee meetings and others, one will not be entitled to those allowances. And this is the Christmas season of budget approvals and appropriations, so why must the Minority forgo those allowances by following honour and integrity in fighting against the draconian budget unleashed on ordinary Ghanaians by a total boycott, if the Minority can get away with spurious press conferences to divert our attention from what they could have done to prevent the rejected 2022 Budget from being rescinded? Radix malorum est cupiditas!

Guided by political expediency and self-interest, the Minority voluntarily offered itself for recruitment as supporting members of the ensemble of Nana Akufo-Addo’s Kabuki dance of democratic-autocratic governance. This is the only explanation why after the rescission “motion was carried, the Finance Minister, Ken Ofori-Atta re-tabled the 2022 Budget and Economic Policy and urged the House to approve it accordingly” with an addendum as reported by Ghana Web that the Minister (created by the Minority with its consensus voice vote at his vetting approval) also “…. indicated that the Budget factored some concessions, following deliberations and concerns from the Minority MPs in Parliament.”

The one-party state prohibited by the spirit of Article 3 of the 1992 Constitution has slowly and imperceptibly crept into the governance style of our democratic-autocratic President through his recruitment skills of the Minority. Ghana is being put Last instead of First under the new compromises between the Majority and the Minority.

Let every patriotic Ghanaian of whatever political persuasion speak up and defend Article 3 of the 1992 Constitution and the other rights enjoined thereunder for prior stakeholder consultation in an accountable and transparent governance system for Ghana.

DISCLAIMER: The Views, Comments, Opinions, Contributions and Statements made by Readers and Contributors on this platform do not necessarily represent the views or policy of Multimedia Group Limited.
Tags:
2022 budget
Martin Amidu
Minority