The Harder They Fall: ‘Raising hell’ in Netflix’s all-black Western 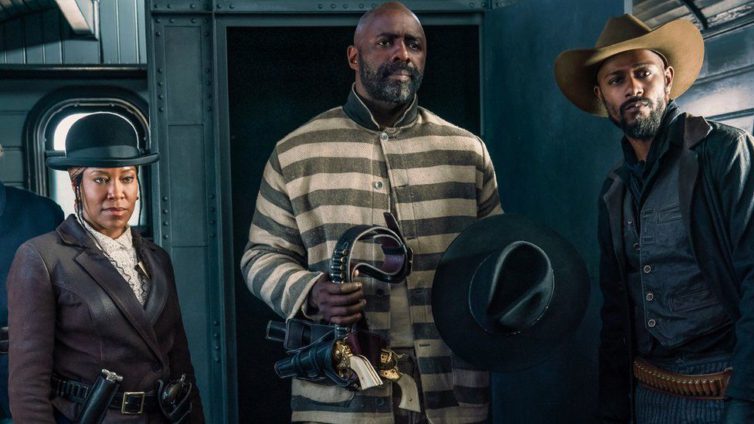 Regina King, Idris Elba and LaKeith Stanfield star in The Harder They Fall

Netflix’s new Western, The Harder They Fall, opens with an intriguing disclaimer: “While the events in this film are fictionalised… These. People. Existed.”

Without it, viewers might assume the movie is an imaginary tale, one of several cases of Hollywood re-casting historical periods and events with more ethnic minority characters than there were in reality.

Except in this case, the opposite is true. A large number of cowboys were black, and yet traditionally the film industry has cast white men in the leading parts of Westerns, with black actors generally in deferential roles.

Director Jeymes Samuel, who fell in love with Westerns as a child growing up in west London, is keen to challenge viewers’ perceptions of the genre without implying his film doesn’t belong within it – a delicate balance.

“I hate the phrase black cinema, and black film,” he tells BBC News. “Because, when you have a film directed by Steven Spielberg starring Audrey Hepburn and Richard Dreyfuss [1989’s Always], it’s not a white movie. So if there’s no white cinema, there’s no black cinema. Cinema is cinema.

“But if every time you put people of colour in a Western, and say, ‘These people were slaves’, and if every time they put women in a period piece or Western, they always make them super subservient, you have to at some point do something about it, and call attention to it.

“So it is not a black film, it’s a movie for everyone to enjoy, but it’s a predominantly black cast, telling the story of how they lived.”

In recent years, the film and TV industry has increasingly employed casts which are less white and less male. Think the all-female reboot of Ghostbusters,Jodie Turner-Smith’s portrayal of Anne Boleyn, and the racial diversity of period drama Bridgerton.

Journalists often grapple with the issue of how big a deal to make of such factors. On the one hand, you might instinctively want to champion something which is different and forward-thinking. Furthermore, by drawing attention to it, you’re signalling that you support it.

But on the other hand, if you talk about it too much, then you’re arguably reinforcing the division, implying that such films and TV shows aren’t the norm and shouldn’t be treated as such.

“I know what you mean, [the more you do that], the more [of a] novelty it becomes, and you want it to be commonplace,” Samuel says. “But the thing is, it’s not commonplace.”

He argues that the industry will only change by calling attention to new approaches. “My whole reason for doing The Harder They Fall is so they can make films and write characters in Westerns, and not have to give a reason for them being there if they’re black, Asian, Latino, Native American,” he says.

“You can correct the imagery that we’ve had of Native Americans in the old West, circling a wagon with a white lady and her children inside. This is just Hollywood’s mythic viewfinder, we just had to broaden the scope.”

The Harder They Fall is out now in cinemas and released on Netflix on 2 November.