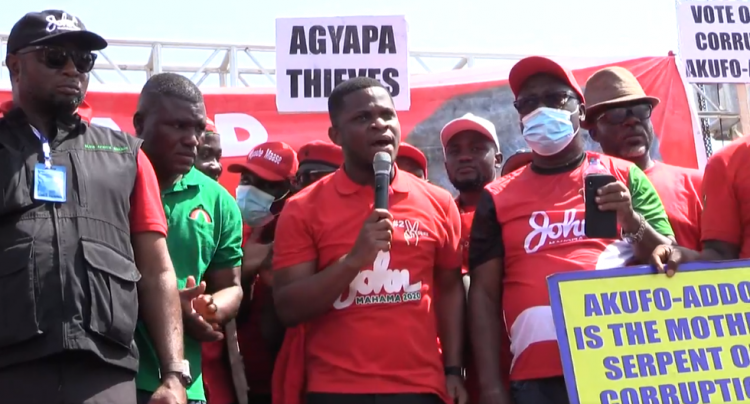 File photo of the NDC demonstrating in July 2021.

The Youth Wing of the People’s National Convention (PNC) says it will join the demonstration announced by the National Democratic Congress (NDC) to oppose the Electronic Transaction Levy (E-Levy) currently before Parliament.

The opposition NDC has said that the proposed electronic transaction levy is a plain government thievery designed to rob the citizenry of their hard-earned money.

At a press briefing, the party noted that Ghanaians are already burdened with many taxes resulting in the increase in petroleum products, high tariffs, increase in prices of goods and services, increase in the cost of living and many others so there is no need to add another tax.

In a press release Tuesday signed by National Youth Organiser of the PNC Mark Ewusi Arko “the scathing hardship visited upon the Ghanaian people through the incompetence, cluelessness and insensitivity of the Nana-Bawumia government in the last five years is no respecter of persons as it affects all average Ghanaians.”

They continued that the decision to introduce e-levy by government is an insensitive measure.

“The height of insensitivity is the infamous decision by government of Akufo Addo to propose and put before Parliament an obnoxious Electronic Transactions levy whose tax burden and incidence will be very unfair and very devastating to individuals and businesses.

“It is unthinkable that the government after supervising a lot of wastage and leakages within the public financial space is seeking to tax the poor Ghanaian to fund their selfish luxury and ostentation.”

The demonstration by the NDC is scheduled for Thursday, February 10, 2022, and is expected to bring together a coalition of political parties, civil society organizations to fight the tax measure.

Two prominent groups, #FixTheCountry and the Economic Fighters League, have rejected the NDC’s invitation to join the intended protest.