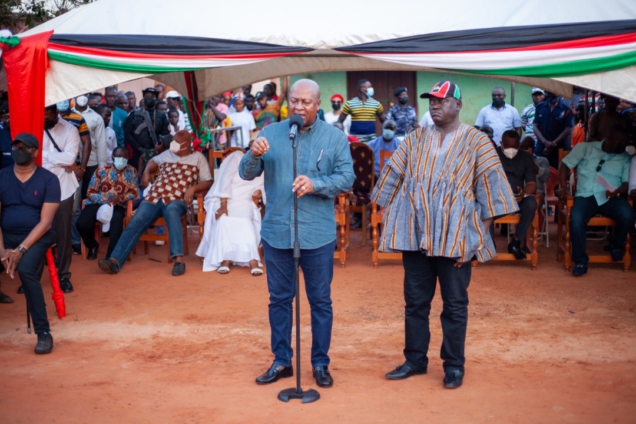 The 2020 Presidential Candidate of the National Democratic Congress, John Dramani Mahama, says the development of the Ashanti region is accelerated only when the NDC is in power.

At a meeting with identifiable groups in the Ashanti region, the former President observed that industry players have complained of suffering under the current NPP administration.

He is confident the people of Ashanti would vote for the NDC in the 2024 elections because the NPP government has disappointed them when it comes to developments.

This comes after the Presidential candidate embarked on a Thank You Tour to the Ashanti Region.

John Mahama said he will be at the polling station to observe election 2024 as part of the vigilance on ballots cast.

Meanwhile, General Secretary of the NDC, Johnson Asiedu Nketiah, said the party stands the chance of winning 40 percent of votes in the Ashanti region in the 2024 general election.

He however says this can only be achieved if the party stays clear of tribal politics in the region.

He explained that anyone that will exhibit a self-centered approach especially in branch elections will be dealt with.

Mr Ampofo says it is critical that the party is united in purpose.

DISCLAIMER: The Views, Comments, Opinions, Contributions and Statements made by Readers and Contributors on this platform do not necessarily represent the views or policy of Multimedia Group Limited.
Tags:
Ashanti Region
NDC
Thank you tour