The puzzle of the 4 seasons total landscaping press conference - MyJoyOnline.com

The puzzle of the 4 seasons total landscaping press conference 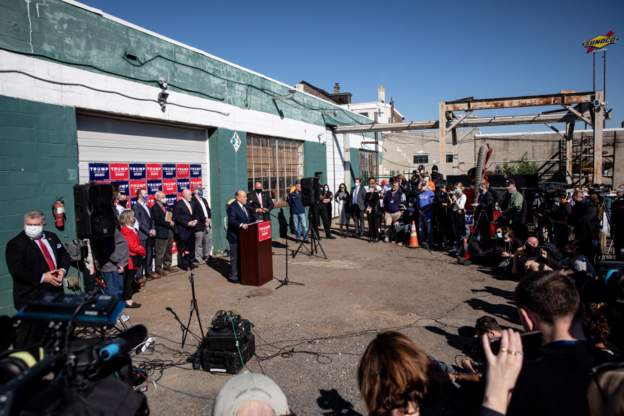 It’s raised a lot of questions online. What was behind the Four Seasons Landscaping saga? We’ve done our best to untangle some details.

On Saturday morning, as Trump repeated unproven claims that the election had been rife with fraud, he tweeted that he was holding a “big press conference”. The venue would be Four Seasons Total Landscaping in Philadelphia (a city in Pennsylvania where Republicans had tried unsuccessfully to get vote counting halted).

Shortly after, the Four Seasons hotel in Philadelphia tweeted a clarification – they were not hosting Trump’s press conference. Four Seasons Total Landscaping had “no relation with the hotel.”

In fact the venue was, as Google Maps revealed, a small garden centre next to a crematorium and Fantasy Island adult book shop on the city’s outskirts.

It remains unclear if Trump’s staff intended to book the garden centre or confused it with the luxury skyscraper hotel in central Philadelphia.

The president had originally tweeted: “Lawyers News Conference Four Seasons, Philadelphia. 11:00 a.m” before correcting the tweet. The New York Times reports that the venue was always the garden centre but Trump had misunderstood the intended location.

Around 11:30ET, as US networks and the BBC projected that Joe Biden would win the election, Trump’s personal lawyer and loyal ally Rudy Giuliani emerged from a door in a small green warehouse and began to address reporters from the car park.

With Trump/Pence campaign posters fixed to a garage door behind him, Giuliani made a series of claims about electoral fraud without providing evidence. At one point, journalists informed him that Joe Biden was projected to win the election. “Don’t be ridiculous,” he replied.

The story was inevitably swallowed up by the day’s huge news – but social media remains thirsty for answers.