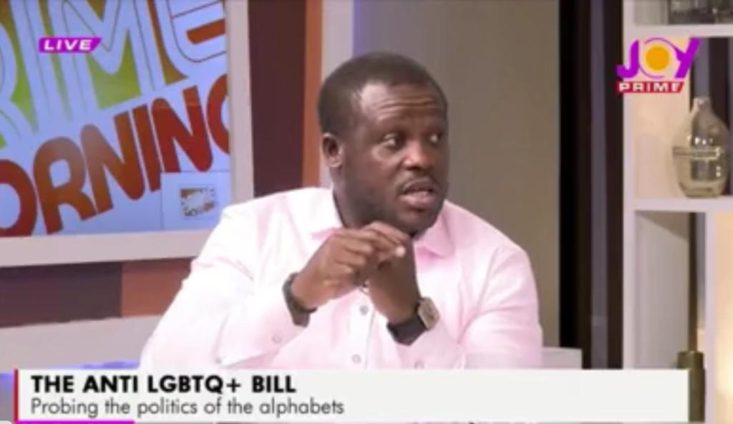 Member of Parliament for Ningo-Prampram says the backlash he is getting on the Anti-LGBTQI bill will not cause him to backdown.

Sam George indicates that promoters of the bill are always ready to welcome diverse views and opinions that will help shape the bill for the better, yet, they will not feel intimidated under any condition.

“Anybody who knows Sam George knows that pressure doesn’t get to me. I don’t crack easily; in fact, I don’t crack. When I’m convinced about [something], everything else is like water on stone,” he said.

According to him, “we are not bound by them, we consider them in as far as it strengthens and shapes the bill better.”

Sam George was reacting to two separate documents that have been sent to Parliament’s Committee on Constitutional, Legal and Parliamentary Affairs making a case against the proposed Promotion of Proper Human Sexual Rights and Ghanaian Family Values Bill, 2021.

The bill has been tagged as anti LGBT but its promoters led by Sam George, say it is in the interest of the nation that an appropriate legal framework makes advocacy for Lesbian, Gay, Bisexual, and Transgender rights illegal.

“The overarching purpose of the bill is to enforce what exists in the Criminal Offenses Act and make it louder and clear that every form, shape, and shade of LGBTQI is illegal in this country. It falls under the current Criminal Offenses Act, Sam George isn’t the one coming to make homosexuality illegal, it is illegal already,” he told Benjamin Akakpo on Prime Morning, Thursday.

Meanwhile, the Human Rights Coalition says the Bill is in direct conflict with a number of constitutionally-protected fundamental freedoms and human rights.

The other coalition led by Private Legal Practitioner, Akoto Ampaw, argues that the bill criminalizes dissenting view and expressions contrary to the words ‘freedom and justice’ that emblazon our coat of arms.

But Sam George believes that these documents have no academic value, neither do the petitioners understand the Anti LGBTQ+ bill put before parliament.

DISCLAIMER: The Views, Comments, Opinions, Contributions and Statements made by Readers and Contributors on this platform do not necessarily represent the views or policy of Multimedia Group Limited.
Tags:
Anti-LGBTQ+ bill
Sam George