This cool hotel is also a cool music studio 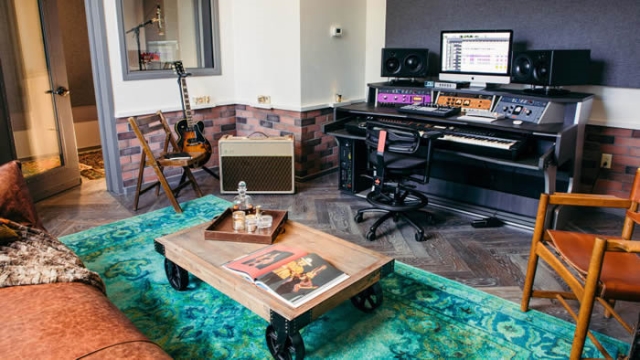 Nashville's reputation as the Music City just got a little more established thanks to a new pair of writing rooms-slash-recording studios, which just opened in one of the city's top boutique hotels.

The hotel is popular with musicians, managers, music execs and other industry folks, so the addition of the Writers' Studios was a decision to cater directly to those who stay there.

"We wanted to invoke a feeling of creativity — unhurried creativity — and a place where artists that are staying with us can feel inspired," said Jonathan Bartlett, general manager of the Hutton Hotel. "We, I think, established quite possibly one of the premiere writing venue in the city for that.

"Our location is steps away from really the heart of the music industry in Nashville. The entire music industry essentially sits on Music Row, which is a few blocks from our hotel."

In fact, you've probably heard a song on the radio which came from the Writers' Studios: "The Middle," by country singer Maren Morris and DJ/producer Zedd. The infectious song, which hit No. 1 on Billboard's Pop Songs radio airplay chart, was written and recorded there.

The Writers Studios are part of a 2017 multimillion-dollar renovation at the four-star, four-diamond hotel.

The reno spruced up the guest rooms and the restaurant, as well as added Analog, a cocktail bar and a 300-person capacity live music venue, in what used to be its parking garage.

The hotel called in Dallas-based firm Studio 11 Design to decorate the studios.

"We wanted this to feel like a home away from home for these artists and writers," Kellie Sirna, principal of Studio 11 Design, told CNN Travel. "We needed the [studio] to feel really comfortable where two or three people could be in their writing with the guitar in hand."

This meant bringing in homey touches, such as candles, books about the Nashville music scene, a jar of candy corn in one of the rooms and "a lot of the furniture pieces actually came from the local antique stores."

Furnishing spaces for musicians meant looking at design in a slightly different way than the interior designers were used to doing.

"We really had to watch the armrests," Sirna continued. "And the sofa style, [we had to] make sure it was deep enough where they can sit back and strum [guitars], but then have a writing surface to write and then strum."

Fortunately, Studio 11 Design had some A-list help in the form of musical expertise: stars Dierks Bentley and Ryan Tedder from the rock band OneRepublic.

The West Room, co-designed with Bentley, carries a Southwestern vibe thanks to the singer's Arizonan roots. An authentic Navajo rug from the Southwest covers the saltillo floor, unglazed clay tiles originating from Mexico.

And, at Bentley's request, his favorite image of Johnny Cash, taken by music photographer Danny Clinch, adorns the walls.

Equipment in the West Room, which holds 16 people, includes mics, a piano, four guitars and an amp.

Bentley left some of his guitar picks in the room, so Sirna and her team started a "pick jar," in the hope that future musicians will leave picks behind and potentially create an art piece out of them.

Tedder assisted on design for the East Room studio, which has space for 12 people. It evokes a funky Brooklyn loft, and at his request, said Sirna, has "a lot of natural light."

A wooden chandelier came from Barcelona, a wagon-shaped coffee table on wheels was brought in from London, and the couch came from the Netherlands.

The design firm also sourced an old writer's desk from the 1900s — "almost like a student's desk," said Sirna. Rounding out the design is a camel saddle — that is, a saddle meant for riding camels. It sits on the floor and can act as a chair or guests can rest their feet upon it.

Recording equipment in the East Room includes four guitars, mics, professional-grade monitors and an amp. And of course, both rooms have their own soundproof isolation booth for recording vocals.

To rent one of the studios, the visitor does not need to be a guest at the Hutton Hotel, Bartlett said. (Additionally, room service from the Hutton Hotel is available in either studio at any time.)

Each room in the studios rents for $300 a day, and they typically rent for the full day.

However, some musicians are benefiting with free access to the studio spaces, thanks to a partnership between the Hutton Hotel and Creative's Day, a nonprofit that assists the artistic community in Nashville.

The Creative's Day Artist Residency at the Writers Rooms is "for singer-songwriters [who] will have eight hours per month over the course of four months to use the writing rooms," Bartlett said. "They can do everything from write, record, and the goal is hopefully to produce original work."

The first artist residency is in progress and will conclude in June with performances at Analog.

And if the world-famous musicians, recording studios or in-house music venue aren't enough for you, there's, well, the rest of Music City.