Thousands rally in Sudan, call for Bashir party to be disbanded 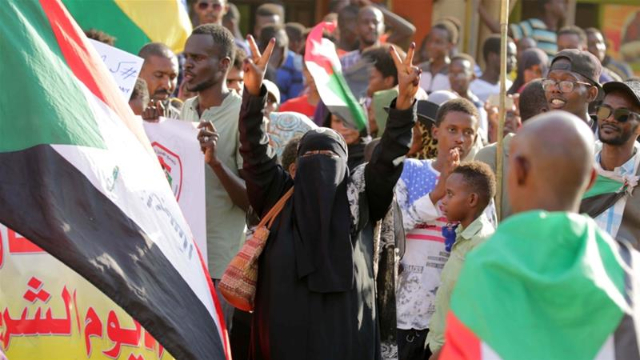 Thousands of Sudanese have rallied in several cities including the capital Khartoum, urging the country’s new authorities to dissolve the former ruling party of ousted leader Omar al-Bashir.

Crowds of men and women rallied on Monday in Khartoum, its twin city of Omdurman, Madani, Al-Obeid, Port Sudan and in the town of Zalinge in Darfur, expressing their support for the new authorities who are tasked with the country’s transition to civilian rule.

The gatherings also marked the October 21, 1964 uprising that had ousted the then military leader Ibrahim Abboud. That push ended six years of military rule in Sudan following a wave of riots and strikes.

Sudan’s current transitional government came to power after a similar campaign of mass unrest, which eventually led the military to overthrow al-Bashir. The country is now ruled by a joint military-civilian administration, which must navigate a delicate path toward eventual democratic elections in just over three years.

Monday’s rallies, organised by the umbrella protest movement Forces of Freedom and Change, were also meant to demand “justice for the martyrs” killed during the months-long uprising that led to al-Bashir’s ouster in April.

Al-Bashir and his National Congress Party ruled Sudan for three decades from 1989, when he came to power in a coup.

Protests had erupted against his government in December 2018, and quickly turned into a nationwide movement that eventually led to his ouster.

The protest movement says more than 250 people were killed in the uprising. Officials have given a lower death toll.

Al-Bashir is being held in a prison in Khartoum and is on trial on charges of corruption. Several other officials of his government and senior party members are also in jail.

Meanwhile on Monday, Sudan’s government agreed to allow humanitarian relief to war-torn parts of the country and renewed a ceasefire pact with major rebel groups at peace talks in South Sudan.

Officials from all sides said the new administration in Khartoum and the two umbrella groups of rebels had signed a declaration to keep the doors open to dialogue.

“The political declaration will pave the way for political negotiations and is a step towards a just, comprehensive and final peace in Sudan,” said General Mohamed Hamdan Dagalo, a key figure in Sudan’s transitional government.

Talks have been underway in Juba since last week between the new government in Khartoum and rebels who fought al-Bashir’s forces in Darfur, Blue Nile and South Kordofan states.

The new transitional authorities, tasked with leading the way to civilian rule, have vowed to bring peace to these conflict zones.