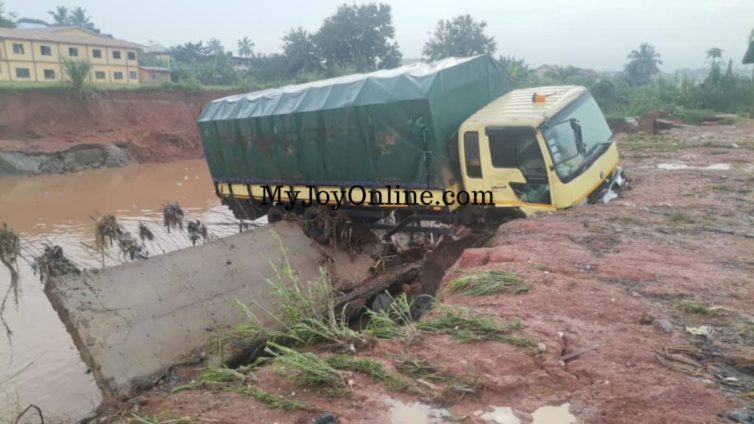 Close to three hours of torrential rains left part of the Kumasi-Obuasi Road flooded for hours.

The three missing were part of a group who joined a KIA truck but jumped off as the floods pulled the vehicle to the wrong side of the road.

“I saw them plead with the truck driver to transport them in the bucket since it was difficult to cross due to the rain.

“When they got to the middle of the river, it had flooded, and the driver attempted to park, but the rain was drawing the car. I saw the people jump into the water, and they disappeared”, a resident, Kwadwo Bosumuru, explained.

The flood left many people stranded for more than three hours. At the time of filing this report, the National Disaster Management Organisation had yet to visit the scene.

Residents are blaming poor construction and building in waterways for the flood. It is the second time the area has flooded this year. Other areas of the city witnessed similar incidents.

At Nhyiaeso near Ahodwo, it took neighbours to rescue a man believed to be in his late forties from drowning. His pickup truck was drawn into the stream after losing balance in the flood.

“We came to meet him sitting on top of the vehicle; the water kept increasing. Finally, we were able to get a robe, and we threw it to him, and with that, we could pull him to safety”, another resident explained.

Part of a recently-constructed bridge has caved in. Authorities are yet to comment on possible solutions.